Sega's top-secret mobile project was finally revealed at Tokyo Game Show 2021 - a "true RPG" titled Sin Chronicle. It's supposed to be a follow-up title to 2013's Chain Chronicle - a tower defense-slash-strategy game - but with a fresh cast of characters and an all-new world for players to explore.

As for Sin Chronicle itself, details at TGS 2021 revealed that it will be a choice-based game where players' decisions have a permanent effect on the narrative. Choices will have lasting consequences with no way to return to branches in the storyline, so every major decision made at the end of each chapter will dictate how each playthrough will go. Players are also encouraged to share their own stories of the game on social media, as these will supposedly connect to each other to form a bigger narrative. 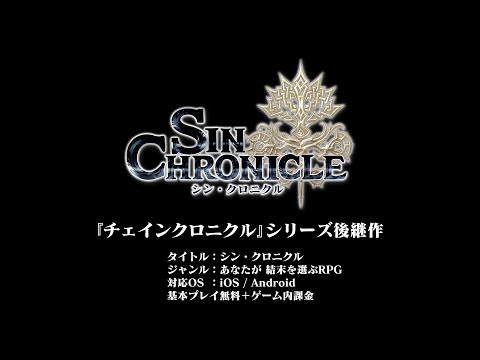 Characters you recruit to join your quest will also affect the outcome of your story, as well as determine the game's bond episodes where you can interact with partymates independent of the main character. Exploration and combat do look action-packed even with turn-based battles. We're not entirely sure just yet if the game will employ a gacha system for recruiting characters, but seeing as it's a free-to-play title, it won't be a surprise if its in-app purchases include a summons pool.

Sin Chronicle is landing on both iOS and Android devices on December 15th in Japan, with no word yet as to the official global release. It's already available for pre-registration on the official website in case you're eager to give the Japanese version a go. You can also join the closed beta right now, as the CBT itself will run from October 14th to the 21st.

Eager to get your hands on more JRPGs on your phone? Why not have a look at our list of the top 25 best JRPGs for Android phones and tablets?

Next Up :
Masketeers: Idle Has Fallen is celebrating its first anniversary with events and new Costumes