From shooting to strategy

Gameloft has announced that its Montreal team, the same one that made the Modern Combat series, will have a new game out this week on iOS and Android called Siegefall.

As you can probably guess from the name, Siegefall isn't a first-person shooter as is the case with Modern Combat. It is, in fact, a medieval fantasy strategy game not too unlike Clash of Clans and its ilk.

What's a little different about it, though, is that you're able to control your own hero during attacks. You tap and swipe to send your gigantic warrior off to club buildings.

There's also a magic card system. With the loot you get from attacking rival kingdoms, you can craft these cards to use during assaults. There will no doubt be in-app purchases to allow you to get these materials without fighting, too. 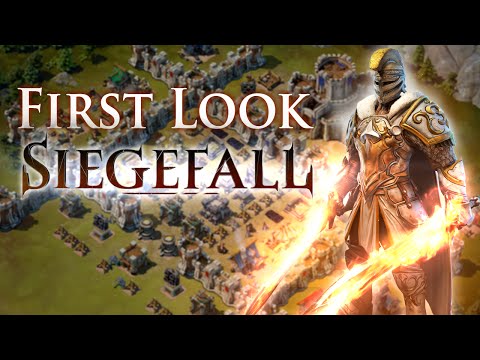 Anyway, on show in Gameloft's video above are cards that bring in a dragon to weaken enemy buildings by flying over and breathing fire on them.

Another card freezes enemy defences for a short time while the other card demonstrated in the video sends magic missiles to damage buildings.

Of course, this isn't a game all about attacking. You'll also have to build your own kingdom, outfitting it with different buildings to advance your armies and defences.

Saw mills, mines, and farms allow you to build up resources. While others let you research new technologies and better train your troops.

Siegefall has a single player and online multiplayer so you should have plenty to keep you busy while playing it. It'll be out this Wednesday, June 24th and should be free to download.