Android
| Sid Meier's Civilization VI
Update (August 21, 2020): Due to technical issues at launch, many review codes were not properly activating - including our own. Aspyr has since fixed the problem, and our review has been modified to reflect our opinions after digging deeper into Civilization VI.

First released on PC in 2016, Civilization VI has gone on to conquer just about every gaming platform on the market. Over the years it has been released on Mac, Linux, iPad, iOS, and even found its way to consoles when it was made available for the Switch, PlayStation 4, and Xbox One. However, the beloved game is just now finding its way to the Google Play Store and Android devices; nearly four years after its initial debut. Much of the game's magic survived the porting process, but a few nagging issues keep the Android version of Civilization VI from achieving the same heights it did on PC.

I won't spend too much time discussing the gameplay of Civilization VI because - let's be honest - almost everyone already knows what to expect. You'll pick one of several dozen leaders, then guide your tiny settlement through the ages until it’s a bustling metropolis. Along the way you'll engage in massive turn-based battles, discuss political affairs with your neighbors, and slowly accrue more resources as you siphon them off from your surroundings.

There's a lot more nuance to it than that, but its safe to say that nearly everything from the original Civilization VI has been made available on Android. The maps are still massive, the match customization options are still robust, and the graphics are still likely to polarize the fanbase. It's been a while since I last sunk my teeth into Civilization VI, but I can safely say that fans of the franchise will be happy with the amount of content made available on their phones.

However, a few minor issues arose during the porting process that you simply won't be able to avoid. One of the most frustrating issues is simply due to the smaller screen size. This game has a lot going on, and it requires players to keep track of dozens of different resources and research goals, not to mention all the units sprawled out across the map. Unfortunately, many of these icons are a bit smaller than I would have liked them to be, and with so much going on the map quickly becomes cluttered and hard to decipher. It's not a dealbreaker - after several turns you'll start to understand what some of the blurry icons are without the need to zoom in or long-press them for details - but it's almost always a pain to navigate the Tech Tree screen. If you've played the original, you'll know that the Tech Tree is at the heart of the Civilization experience, and viewing the convoluted menu on a tiny screen simply isn't the ideal way to play.

The downsize in display also poses issues during large battles, making it a bit cumbersome to select your units and move them around the board. You can work around this by zooming in on the action to get a better view of your preferred unit, but keyboard and mouse certainly beats out using a touchscreen.

Beyond these minor complaints, Civilization VI runs like a charm. I experienced no lag during my time with the game, and it could quickly render completely different areas of the map as I toggled between units far away from each other. There's a bit of a long load time when first launching the app (the game took a full minute to load on my device), but outside of that the downtime is few and far between. 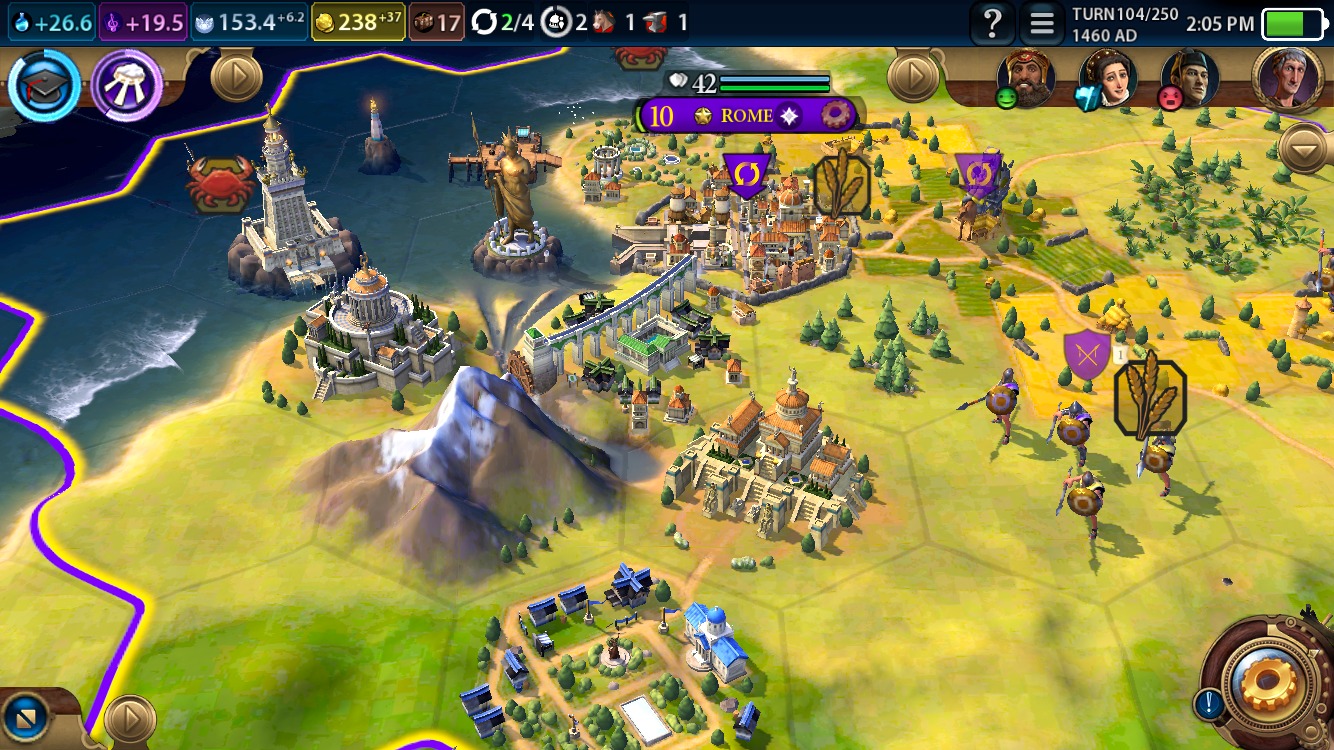 Civilization VI is one of the best strategy games of all time, and the Android version is no exception. It's a bit on the pricey side for a game that's essentially four years old - running you $19.99 for just the base game - but you'll at least get to experience the tutorial and 60 turns for free prior to making a purchase. And, if you choose to buy Civilization VI, you'll be getting the game in its entirety, not a watered-down mobile port.

Whether or not you're willing to purchase such an expensive mobile game when you already own the PC version is a completely different question, but if you can get over the price barrier there are hundreds of hours of fun waiting to be had.

Although it suffers from a few porting issues, the heart of Civilization VI remains intact. Fans of the franchise will be thrilled to discover that this is the exact same experience offered on other platforms, and one that holds up after all these years.
Next Up :
Jade Order review - "An puzzling path of the warrior"