And one reason it really isn't

Shuffle Cats represents a departure for King, the studio most well-known for Candy Crush Saga and other intensely popular match three puzzlers.

This time around, King is moving into the growing genre of asynchronous multiplayer mobile games. It's set on the rooftops of Victorian London, features a cast of zany cats, and plays like a more casual version of the card game Rummy.

It's essentially the same, but gamified. Rather than having to get rid of every card in your deck, here you score points based on the melds you produce - essentially a run of cards. First to 10 points, wins the game.

Much like the ultimate competitive mobile game, Clash Royale, Shuffle Cats is entirely multiplayer - at least once you've completed the tutorial. It's also very moreish.

Now that the buzz has died down for Clash Royale somewhat, we think the time is perfect for Shuffle Cats to take the centre stage. Here's four reasons why (and one why absolutely not).

King's games have been predominantly casual thus far, and while Shuffle Cats is pretty easy to pick up and play, it's a highly competitive experience. Each game is played in real-time multiplayer, costs a sizable sum of gems to play, and you get absolutely nothing for losing. 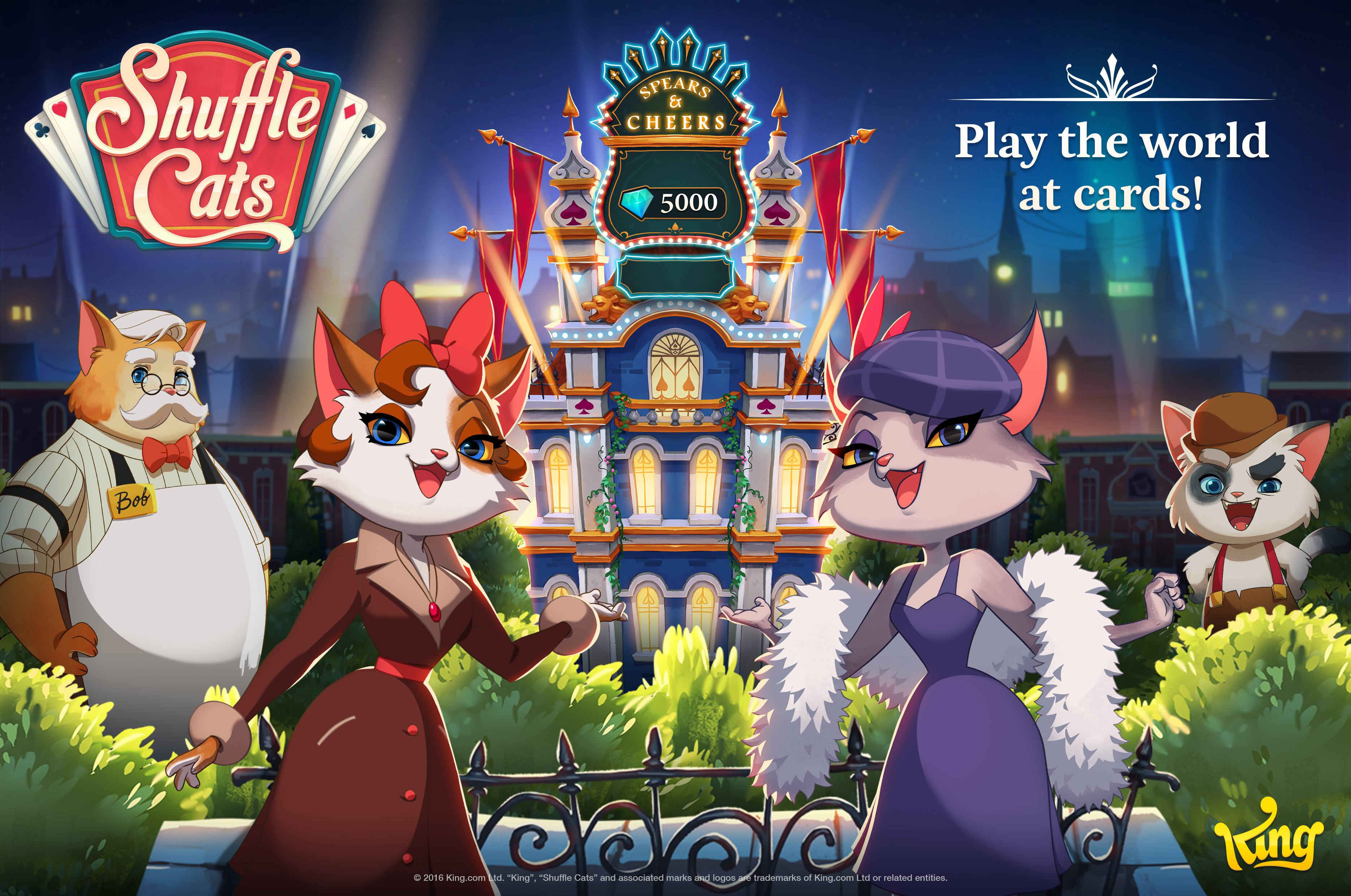 And the stakes only get higher the better you get. Once you've completed the tutorial and have unlocked Lucky Lane, there are a bunch of different competitions to participate in. The higher the gem stakes, the higher the rewards at the end.

You can also level up your rank to show off not only your time spent in the game, but your aptitude at it too.

It's more than just a card game

Rummy itself is a fun game - as is Shuffle Cats's unique take on it. But it's more than just a card game.

For starters, as you rank up you'll unlock a series of Lucky Charms, which act as modifiers for how you play. There's Zap, which reduces your opponent's score. Freeze, which prevents them from using three random cards. +1, which does what it says on the tin. And King and Queen, which doubles your points for melds which includes those cards.

Aside from that, there's a minigame which you can play daily to blag a few more gems. It's called Hearts and Spades, and challenges you to guess which suit the next dealt card will be. You only have three lives, and get a rising number of gems depending on how many correct guesses you make.

The characters have more, erm, character

So Clash Royale characters definitely have character. You only have to throw down a Hog Rider to see this in action, as he screams Hog Rider! While bounding into battle.

King has taken this to the next level with Shuffle Cats though, and hired a team of scriptwriters to produce bios and a narrative for each character.

This helped the designers create the characters you see in the game, and you'll get a sense of each of their backstories as you go.

Okay, so this isn't directly-related to the gameplay, but it has to be said that Shuffle Cats is a real eye-catcher. That's pretty much what you can expect from a King game at this point though.

The visuals are reminiscent of a classic Disney film - particularly The Aristocats - with bright colours, gorgeous hand-drawn backdrops, and well-animated characters.

Clash Royale isn't too shabby in this department either mind, but it doesn't really touch Shuffle Cats in terms of visual fidelity.

The one downside of Shuffle Cats is, admittedly, the free to play elements. They feel a bit amateur compared to Clash Royale's now completely flawless model.

You can't just enter a match at any point, you see. Instead, you have to pay a gem cost, which is based on the competition you enter. The higher the gem cost, the more you get back if you win.

Now, I understand the conundrum. Shuffle Cats is based on Rummy, and there's a real gambling theme to Lucky Lane, where the main portion of the game is played.

This theme ultimately is pretty convenient though, as frustrated players will be forced to lay down the cash to continue playing.

Sure, you get a few free games a day thanks to free gem giveaways and the minigame, but Clash Royale never prevents you from playing so easily takes the upper hand here.

Cheats and tips - How to win at King's Shuffle Cats

Shuffle Cats review - Does Clash Royale have a new competitor?