Shadow of Naught is a stylishly presented narrative-adventure that recently became available on Google Play Pass after releasing on iOS and Android. It won several awards prior to release so we decided to hand it over to our own judges - the App Army - to see what they thought of it.

This is a short interactive experience with not a lot to comment on. It follows the story of 3 people with a tangled love interest. I found parts of it really depressing with scenes of suicide and very strange dialogue such as ‘behind my heart is puss and blood’. The characters are shallow, the plot confusing and the dialogue didn’t flow.

There is a smattering of mini-games but they are very simple and hardly worth doing except you can’t move forward without completing them. The game is so short but says it’s to be continued, though I feel that if I’d paid for it I would have been aggrieved at the short length unless the next chapters are free. I don’t think I’ll bother with the next chapter.

First of all, I like these type of games, it's in the same vein as Photographs and a bit like Florence. The first set of stories were very interesting and it grabbed me in but was a little disappointing as they didn't finish the story. This has some lazy writing though as there are choices but they don't affect the storyline because there's one choice you have to select to advance to next stage.

The cutscenes, animations were quite well done for a small team. I like the fact they didn't tell too much about one character's story as it was very interesting to me. The mini-games were kind of same, I didn't like the Rythem games like the Guitar Hero one because in one stage the story was advanced to the next act but why?! I would recommend a niche who like these types of games and would love to play and see where the story goes.

This game is beautiful! And a good game to play for people who like narrative games! The game does lack consistency in terms of mechanics! But, as I mentioned earlier, the USP of the game is Narrative and players who like this genre aren't going to notice this inconsistency! Other points that I wanted to pinpoint are greatly covered in the comments written by Rahul Mazumdar and Torbjörn Kämblad! 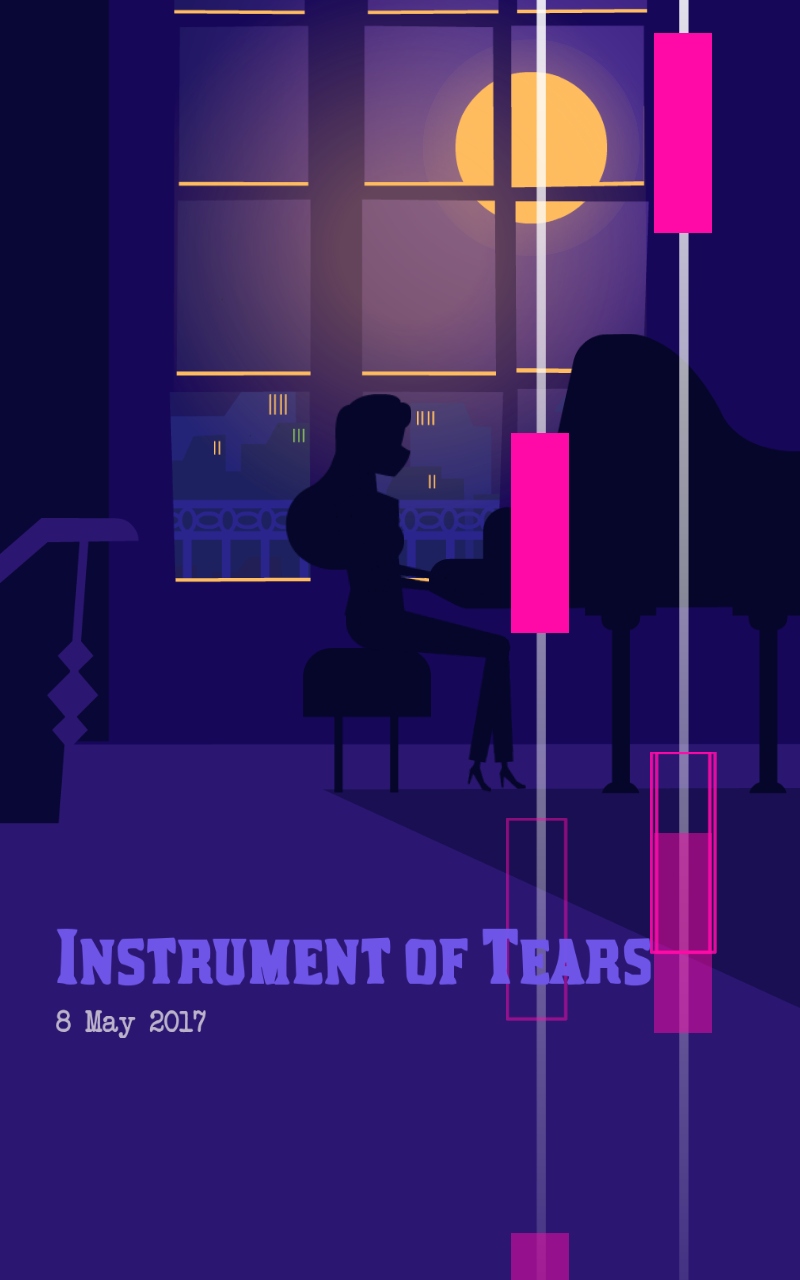 SoN is a text-based neo-noir about an ill-fated love triangle between two men and a woman. The gameplay is mostly comprised of clicking your way through dialogue options. Unfortunately, the dialogue is often cringe-inducing and feels awkwardly phrased. I don’t know if this is translated from another language, or the writer isn’t a native speaker, but it just doesn’t flow. There are a few mildly entertaining mini-games. I liked the Guitar Hero-ish piano game the best.

While barely animated, SoN’s bold mix of vibrant colours and blackness is eye-catching and appealing. I also greatly appreciated the music, it sets a score for regret and the lingering effects of the tragedy. In terms of story, nothing here is very innovative, and not a particularly strong retelling of your classic love triangle. You’ll want to know what happened, but you likely won’t care afterwards. Poor dialogue, cliched writing, and low replay value all make SoN a game that I can’t recommend.

I like the idea of interactive storytelling in an iPhone game. Something beyond the simple arcade shooters and platformers (although I do like those too). But Shadow of Naught just doesn’t do it for me. I like the visual art style. What little controlling was necessary worked fine. The sound is okay, if a bit annoying after a while. The story is pretty simple and I neither liked nor cared about any of the characters enough to play for more than a half-hour. And that’s stretching it.

The mini-games seemed entirely out of place to me. It felt like an attempt to involve the player more maybe. It didn’t catch my interest as it didn’t seem really related to the story. It wasn’t immersive. So really not much that appealed to me, and a pretty short story. If you want interactive stories, there are, I’m sorry to say, much better ones to choose from. 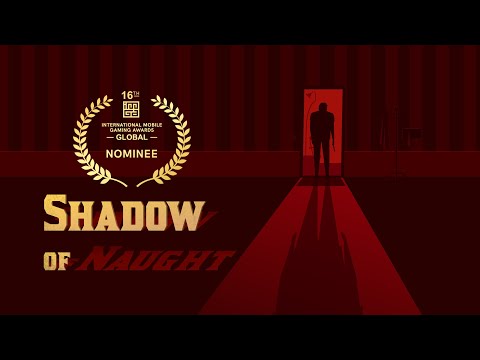 I am not sure what to make of this game. I don't think I have ever played anything quite like it before. This type of interactive story is not a genre of game that I usually download, so I do not have any other games I can compare it to. The story revolves around 4 characters going through emotional situations. The story is interesting but was a little confusing at times for me.

The game is too short. I wish the characters were fleshed out more. You basically go through conversations between the characters and selecting the correct responses. Mixed in between dialogue is a series of mini-games, such as completing mazes or playing music rhythm tasks. Nothing special about the mini-games, as I have seen them done better in other games.

Shadow of Naught is an interactive story that is consists of choices and mini-games that lead you through the life of the three main characters. First the good, the graphics are very stylish, all you see of the characters are silhouettes, it looks great. The sound is a bit tinkly but it does the job.

The bad, it’s very short, you complete the game within an hour. More chapters are promised but for now, this is all you get. The text conversations are very trite between characters and the Andrew character comes over as very creepy. The mini-games are not very engaging. Still, I enjoyed the hour playing the game and it’s worth a try if you like games like Florence. 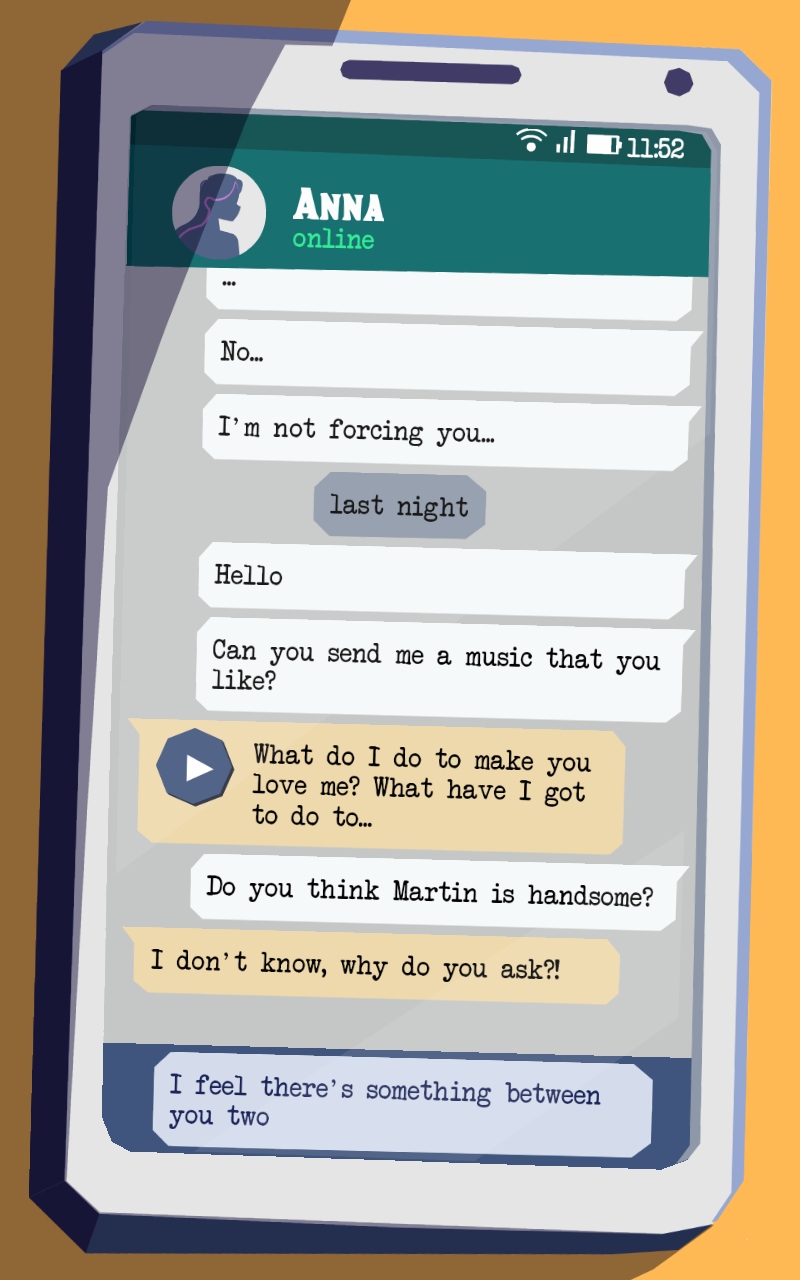 Shadow of Naught is more of an interactive short story rather than a game. It tells a story about four people, caught in a sea of emotions. I mentioned the word short because it is indeed quite short. One can finish it in one seating. (probably in an hour) It felt a bit rushed and could have fleshed out the character backgrounds more. The story did say that it will be continued so it’ll be interesting to see where it goes.

Looking at the credits, a small team worked on it so I have to say they’ve done a commendable job. The story is interesting, the gameplay is smooth and there are absolutely no performance issues. A very solid package.
Now few places where I felt the game fell short were its open-endedness, varied gameplay mechanics and writing/dialogue choices at times. Instead of allowing the players to choose stages, it would have been much better to give a more linear experience. Also, the varied gameplay mechanics can get a bit confusing. It could have stuck to a smaller set of mechanics to not break the flow of the story.

Finally, the writing at times feels a bit off and the dialogue choices don’t really feel consequential as the character eventually uses all the choices anyway. (At one point, the dialogue just goes in a loop until the right choice is made to proceed) These are mainly design choices and maybe something to be improved upon when they do decide to continue the story.

Overall, I was pleasantly happy with the game. I wasn’t blown away by the story or anything but I don’t think it was trying to anyway. It was trying to tell a compact, but the deep story and for the most part, it did succeed. I just wished it would have been curated more linearly so it wouldn’t leave me somewhat confused and with a handful of questions by the end.

Shadow of Naught is a game about relationships, loss and despair. The game is divided into short chapters and took me less than an hour to finish. The highlights of the game is the stylish silhouette graphics playing with shadows, alongside the labyrinth GPS-minigame. There are a lot of issues with the game, often I find myself tapping the screen to get the dialogue to hurry it up. Some of the minigames feel like filler material, and the piano rhythm sections are quite tedious.

The possibility to get different branching dialogues, and perhaps different experiences weren't clear to me. I will not replay the game to get a different experience, as I didn’t get enough out of the game. The short playtime made me finish it, and that is quite rare these days. I would only recommend it to a niche set of players looking for a slowly paced relationship drama. 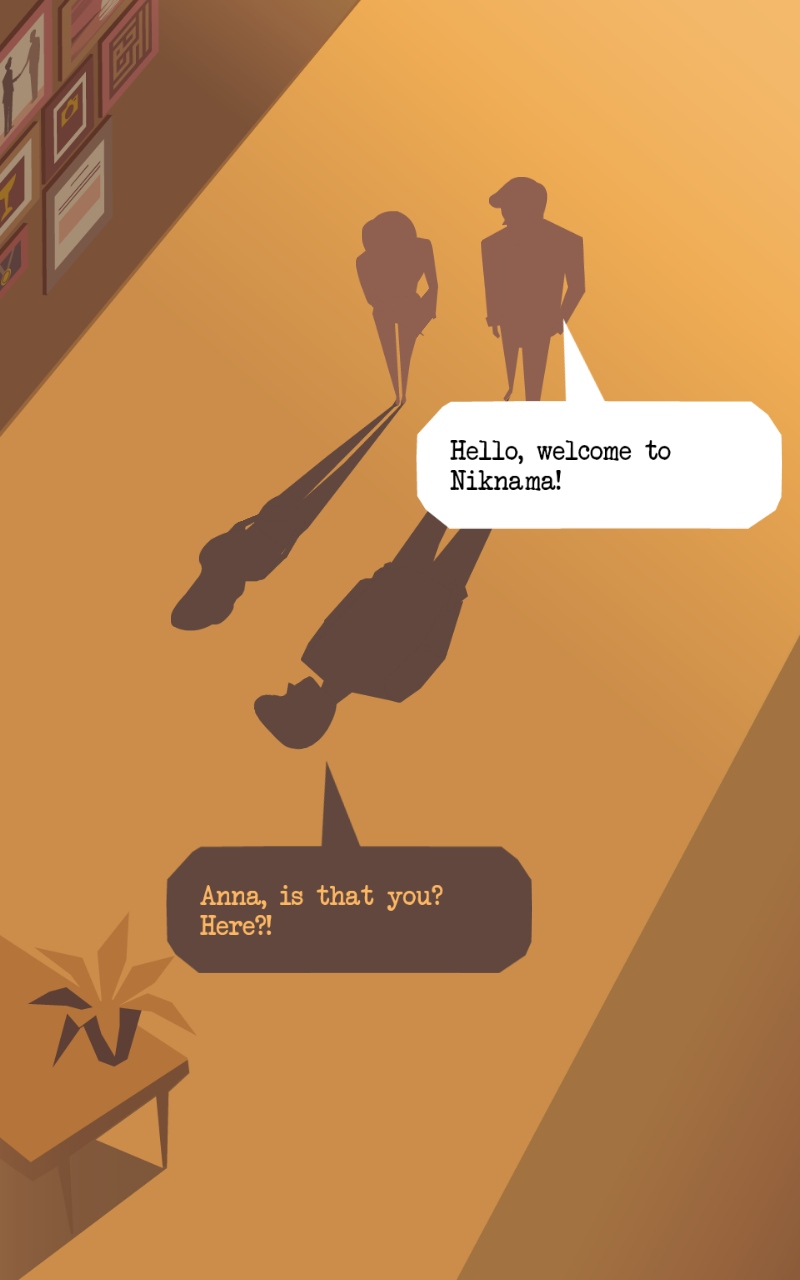 Having just finished the entire game in about 45min, the strongest point for Shadow of Naught is that it is mercifully short and that despite the various shortcomings, I felt compelled enough to finish it. The weak points of the game are many; the dialogue between the male and female leads have no nuance or emotive impact, there were many dialogue options that made me cringe and few that gave voice to my own emotional reactions (the whole point of a dialogue box), not that it matters, because there is only one option that actually moves the conversation forward in many cases, leaving me to run in circles through dialogue until I choose the option that I avoided throughout.

The contrivances in storytelling make a maddening muddle of erratic character motivations and behaviour. Yet the story of an ill-fated love triangle is so simple that I could relay its bare totality in two sentences.
Things that linger with me now are plot points that were opened but not closed again, one character is an MMA coach in one scene, but a creative executive in a penthouse office the next.

For brevity’s sake let’s move on to the gameplay, mini-games range from the tacked-on but mildly fun Deemo/Guitar Hero styled piano sequences, to a maze puzzle where you use an analogue stick to move your pointer through at an excruciatingly slow pace. One traffic dodging mini-game serves no purpose at all, other than to confuse you because the character driving never actually leaves the house.

It is clear that the excellent Photographs - Puzzle Stories by EightyEight Games is an inspiration and I would point you there instead.

I played section one of each character – Andrew, Anna, and Martin. While playing as Andrew I did not know what to do to get started. I found the help menu too vague. I ended up watching a YouTube video to begin the story. With that said, once I knew how to interact with the game, I enjoyed it. I could see myself playing through the game in one sitting. The visuals were wonderful. Normally, a noir type game is dark. Shadow of Naught mixes colour and darkness to bring forth a unique presentation. Another element I enjoyed was reading what the character was thinking compared to what the character said.