ScourgeBringer is a popular roguelike platformer that first released in 2020. Now, it has made its way to iOS and Android, giving more players access to this gem. However, porting to mobile can be tricky since developers must revamp the game to suit touchscreen play, which isn't easy. So, we handed ScourgeBringer over to our mobile experts, the App Army, to get their opinion on how the game plays.

I really like the art style of this one. Has a nice pixel style that still looks vibrant and colourful. It is a platformer/ Metroidvania with very fluid controls for a mobile game. Combat is very fast, from what I have played so far. Unfortunately, I had a very busy weekend so I was unable to play for more than an hour, but I am enjoying it so far and intend to play more.

Legacy. Aesthetically it evokes HyperLight Drifter. You have a hub where you upgrade using resources you collected on your runs, then you hit the world and push. The game is lauded on Steam, and all that splendour translates well to mobile, the controls are intuitive on the touchscreen, incorporating swipes from your floating joystick into vicious dashes, and contact with the enemy means violence to them, rather than the other way round (a la Rogue Legacy).

My time with ScourgeBringer has been incredibly fun, it looks beautiful, it sounds great, the action is visceral as you whack bullets back into attackers before pulverising them under a flurry of world-shaking blows, it is therapeutic, and it works as smoothly on my iPad Air 1 as it does on my iPhone 11 with a modest file size under 200MB. This one is a GotY candidate for me, and it will hold permanent residence on all my devices.

As a fan of rogue-lites/roguelikes, ScourgeBringer immediately caught my eye. In this game, you play as Kyhra, cleaning rooms of enemies and exploring the tower, looking for humanity’s redemption. While ScourgeBringer shares the same main aspects as many rogue-lites – clear rooms, loot, fight the boss, go to the next level – I like the dynamic and fast-paced gameplay that the dash and double jump give you.

The combat itself is fine, with auto melee attacks when enemies are near, which charges your pistol, and you also get a smash attack which lets you stun enemies. My main problem with the combat in the game is that the controls are pretty close, so I tend to press an attack that I don't want.

The retro graphics are pretty nice, and while the atmosphere is pretty dark, with a lot of blue and purple, nothing gets lost in the background, which is nice. Personally, while this type of game is nothing new, it hits all my spots: pixel art, rogue-lite, and fast-paced combat, so I know this will be staying on my phone for quite some time.

Humanity has been driven to the point of extinction by a pillar in the sky called the ScourgeBringer. You must now face the trial and save the world.

While not as detailed as some other rogue-lite counterparts, SB is still satisfying to look at. A cyberpunk meets ancient tribe aesthetic sets the tone design, with a blue, green, and purple colour scheme. Reds, especially blood, stand out and seems to be part of a larger story element. The game is well animated, no lagging noted. Heavily synth mood pieces promising a long apocalypse are suddenly pierced by an intense combat theme. It works well with the setting. Sound effects are a bit less successful, but nothing too irritating. 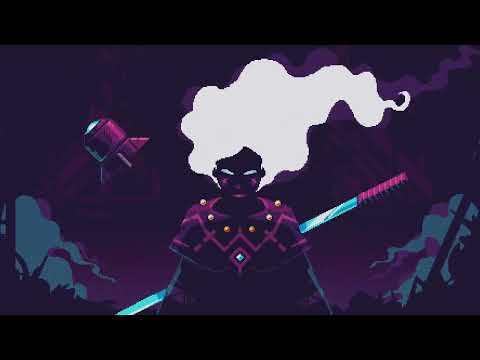 The gameplay is basic platform combat, with double jumps and dash attacks. You must charge your gun in close combat, so primarily melee-based. You auto-attack with a sword when close enough, and have an alternative smash attack to stun enemies. The auto attack is a nice touch. Unfortunately, these controls are close together, and errors often happen. I have wasted my clip on several misfires.

The whole time I played SB for this review I was comparing it to Fury Unleashed, which I reviewed in April. Comparatively, FU is superior in all aspects. However, that doesn’t mean SB was bad. I give SB a conditional Do Buy if you’re into this kind of action platformer. If you only need one of those in your life, I’d still stick with FU.

Good-looking retro-graphics platformer/Metroidvania/rogue-like game that on one hand has a lot in common with others of the genre. At the same time, there are lots of places to explore. You have weapons and equipment and health upgrades. As you clear a room of bad guys sometimes you’ll find a second wave of larger, stronger bad guys.

I liked this, knowing that it was throwing more of a challenge at you (though the first level wasn’t too challenging for me- just enough to feel a bit of satisfaction at beating it). Other times and later on, defeating the bad guys opens doors to other rooms and more interesting challenges. And as you progress, it gets a bit more challenging.

I liked the overall visual theme. Sort of dark and dungeon-y to me, which is always good for something like this. Music and sounds were okay but just as a matter of personal opinion, didn’t add anything to my experience so I turned the sound off. My main concern initially lies in the onscreen controls, which I found to be awkward and I had trouble coordinating movements and jumps and attacks.

Might just be me. Your results may vary. But once I plugged my iPhone into the BackBone controller, I had a pretty flawless control experience. Jumping and shooting or swinging my sword. Bouncing/climbing along walls. Even hovering sometimes long enough to get off the right attack or reach a higher level. For me anyway, the controller support makes this game silky smooth from a mechanical standpoint.

All in all, this isn’t a unique, one-of-a-kind game. It’s been done before. But in this case, it was done very well and is a pleasure to play and advance in. Especially if you use a controller, this game is a winner in the genre.

Scourge Bringer is a fast-paced rogue-lite action platformer in the vein of Dead Cells (but lots more jumping/dashing). I like the fast-paced action and the music is pretty inspiring as well. Giving you a nice metal soundtrack when you get into a fight. Controls on the phone were playable but it was much more enjoyable when playing with a controller.

The swipe to dash on the phone kind of works but needs some polish (and truthfully is a bit to master on a controller as well). I love the graphics. As I said, it's more in the vein of dead cells in the graphics department as well. I feel it gets much more hectic as you continue your journey and is challenging, but overall I enjoy it.

I heard this somewhere else and I think I rather agree that Scourgebringer is sort of like a mixup of Deadcells, Celeste, Dandara, and a sprinkle of originality. The game starts as you enter a random variety of levels or rooms with different numbers and types of enemies. Controls work a bit like a platformer with weapons such as a sword and guns to dispatch enemies.

What I immediately found cool and fairly intuitive is the dash attacks that are effective against some enemies. You will find yourself dashing and double jumping around the screen using these attacks to take out enemies. Sometimes you are awarded with powerups at the end of a fight or a boss fight. The action is quick and fast and plays a bit like a rogue-lite arcade game would play if one truly existed in the 80s. The graphics are detailed enough while maintaining a 16-bit type of charm.

The music is pretty good for the electronic sci-fi setting. A patch was dropped today to improve controller support which is appreciated. As long as you go into Scourgebringer wanting more action than exploration you will enjoy your time and the asking price is about right. I prefer a bit more exploration as in Dead Cells or Metroidvania but Scrourgebringer is much more suited for quick play times.

To join, simply head over to either our Discord or Facebook Group and request access by answering the three questions. We'll then get you in right away.

Next Up :
Interview: Playdigious discuss porting games to mobile and the importance of controller support

ScourgeBringer set to release in the very near future