The canyon around me ripples and shifts, its walls narrowing and changing as I shoot along them at breakneck speeds. There's something mirage-like about the optical changes, as though I'm weaving through heat haze rather than some physical manifestation of the passage of time.

There's nothing particularly mirage-like about the walls though. Smashing into them is probably the worst thing you can do in Scorcher. And since you've also got to dodge bombs, eat sharks, and jump over enormous worms, that's really saying something.

Scorcher is a super-fast arcade racer with a focus on getting as far as you can. It's got a few niggles here and there, and there are times when it'll make you want to crush your phone in exasperation, but when it hits its marks, it hits them with the sort of strength and confidence few other games can muster.

You control your careening craft with a thumb at the bottom of the screen - move your thumb left and the ship swerves in that direction, and so on. Lift up your thumb, or if you'd prefer swipe down, and your craft will perform a little jump. To begin with its innocuous, but the deeper you get into the experience the more essential it'll become.

There are other creatures moving down the valley floor too. Most of these are sharks, and you'll want to collect as many of them as you can. When you take a hit, you can eat a set number of the sand monsters and your health will recharge. It's a nice twist, and gives you an extra chance to do well.

There are also bombs in your path, which you'll need to dodge or leap over, and huge worms that crunch up the scenery and will do as much damage as a rock wall if you hit them. Learning how to get past them offers up a good chunk of the game's frustrations, as well as a decent dollop of its fun. 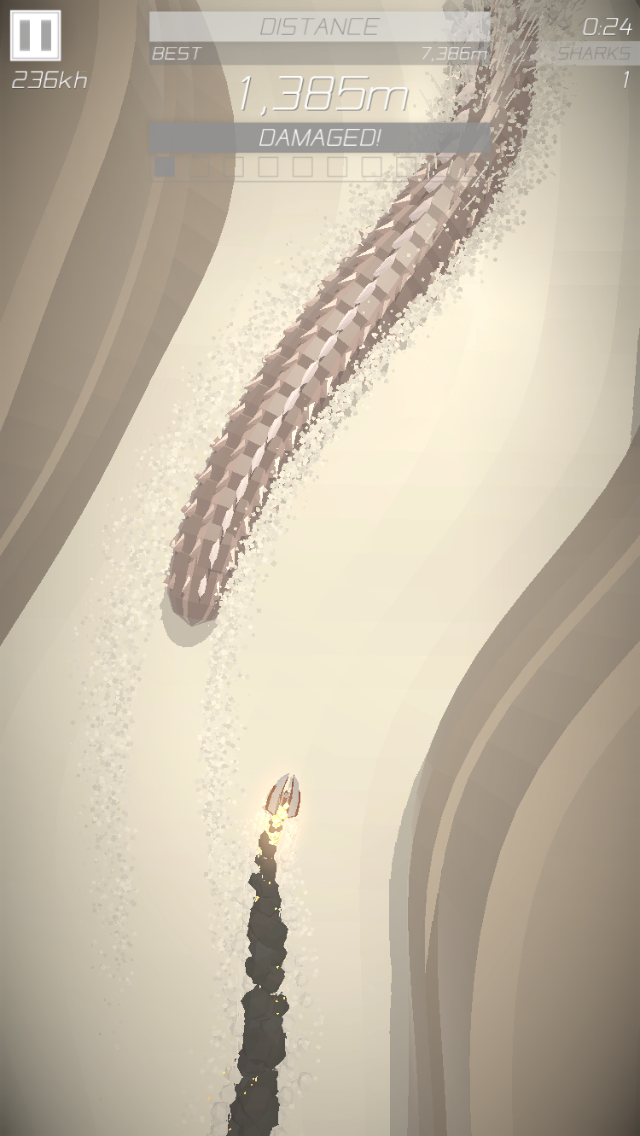 There are problems here though - it does take the game quite a long time to get going, and while it's fun to begin with, it's nowhere near as fun as it gets later on. Mobile games often benefit from a little bit of top-loading, and it definitely wouldn't go amiss here.

Things sometimes get a little repetitive too, especially as you're working to unlock new levels and ships. The progression curve is a little too steep, meaning sometimes you'll hit your frustration tolerance levels before you actually manage to unlock anything.

That's not to say that every run doesn't push you towards the next track or the next ship, it's just that there's a sense that the gaps between the unlocks is a little on the lengthy side. It's not the end of the world, but brains used to the dopamine floods of more casual mobile experiences might lose interest a little too quickly.

Stick to the middle

In the end, Scorcher does enough to push you past its faults. You're definitely going to notice them, but they're never quite large enough to force you to stop playing. They do, however, keep it from being as easy a recommendation as it should be.

Scorcher is good, but it could be really, really good if its balancing was a little better. Still, when you're thrashing through the game, leaping over ravenous space worms, and dodging bombs left right and centre, your brain is going to be too caught up to care.

Scorcher isn't perfect, but when it's flowing you're going to be having too much fun to care
Next Up :
UFO99 review - "A fun little arcade game on the go"