Scorcher impressed our Harry with its blistering speed, simple controls, and ridiculous gameplay that takes a while to get going, but really steps up its game when it gets there.

Sound good? Then go join the App Army! And come right back to read the reviews of Scorcher! 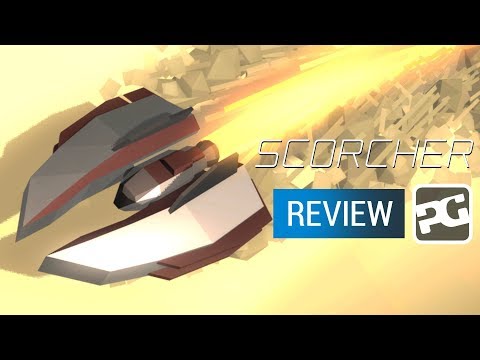 I'm liking Scorcher. It’s like what bored teenagers on Tatooine do if they aren’t afraid of getting killed before they hit twenty.

Avoid the walls and the worms. Hit the sand sharks to speed up and repair. And beware Tusken Raiders (not really). Music is good, though I turned it and the sound off as it kind of took me away from the zen of jumping and dodging.

Seriously good looking game with easy, simple controls (no issues on my iPhone screen) and basic but good graphics. I’m not a fan of endless runners, but I liked this, as it appeals to podracer in me.

Doesn’t take too long or too many attempts to do well enough to unlock the next level. I can see myself going back to this one regularly, and I can happily recommend it.

It took me a few goes to click but once it did (had to change some options) I got hooked. The gameplay so far is simple - ram sand sharks and avoid the giant worms by timing your jumps to overtake them.

Avoid hitting canyon walls. If you do, you have to ram a certain number of sand sharks to get your ship repaired. You aim to beat your personal best each time, and if you reach a certain distance, you unlock the next stage.

Controls are simple use your finger to steer remove it to jump (you can control your ship mid jump). So far I like it.

Unlike all the other Radian games I’ve played, I was initially befuddled by how to control the ship and kept crashing (the game comes with no instructions). After messing around with the settings it finally clicked and I could start playing properly.

It’s another variation on an endless runner, in this case you guide your ship through a winding canyon crashing into sand sharks and trying to avoid hitting the giant worms. Get far enough and you unlock further levels.

It’s nicely executed, but I didn’t find the gameplay compelling. If you are not as jaded as me when it comes to endless runners you might get some fun out of this game. As for me, I’ll go back to playing Canabalt.

I still cannot make my mind up about this one! It has all the usual endless runner score chasing hooks and pitfalls but does just enough to set it apart from the others (for a limited time).

The controls take a bit of getting used to and I found the longer I played the more my finger would stick/rub on the screen and cause untimely deaths. If this is your kind of game then it ticks all the boxes, but it’s not one that’s going to leave any significant mark on the genre.

I’m not a great fan of endless runners and so I started this game expecting to be underwhelmed. To be fair, as far as endless runners go, it wasn’t a bad game. It had all the usual boost abilities, objects to avoid and racing music (which I found annoying and turned it off). The graphics were sharp and colourful and the controls were easy enough to master.

As with all endless runners, I eventually became bored with constantly starting the level I was on again and again and again until I could score enough to move on. Not one for me but If you are a fan of the genre, you will definitely like this game.

Endless runners aren't exactly in short supply on the app store these days, so any new release needs to bring something new to the table to stand out from the crowd. Sadly Scorcher doesn't deliver on this front and there is little to do but unlock courses, ships and run, endlessly. As you may have guessed these types of games are not my favourite.

In fairness I thought the graphical style and and music are top notch, my only issue was the game area feeling a little cramped on 7+'s relatively generous screen. If you enjoy endless runners Scorcher would be an excellent addition to your collection.

Having played a fair amount of endless runners in my time, I had a high set of standards coming into this one.

The art style of the game is simple and doesn’t go much beyond that. Each stage looks the same and there’s not much in the way of obstacles to dodge, just the winding cavern. Some people might enjoy this but having played games like Race the sun, with diverse and changing scenery, this seemed a bit minimalistic for me.

The controls work well for a touch screen and again, are simple and easy to grasp. This game might appeal to some that are newer to the endless runner genre, but for me, it was just a bit too simple.

Definitely not a game I’d be in a rush to play again.

Another in the long line of endless runners that does all you’ve come to expect without adding anything new or memorable and I was soon bored with it. Maybe if I was allowed to shoot that annoying sand worm I’d be happy, but I wasn’t, so not happy.

Controls were simple enough, sound was meh, and the graphics were good enough for what they were going for. Where it really fails is in the actual gameplay, which is forgettable.

Scorcher didn't strike me in the same way Radiangames' other titles have. I have to confess that Endless Racers are not my go-to genre, Hyperburner being of the few to hold my attention.

My first half hour with Scorcher was not very rewarding, mostly consisting of careless mistakes around learning fundamentals. Every time you steer your little sand-racer left or right it launches into the air, this is essential for clearing obstacles, but your craft can not collect the primary resource, Sand Sharks while airborne.

Initially I was plummeting down the narrow track in a chaotic and uncontrollable bounding, later the rhythm and flow began whispering a path through perilous obstacles on the track. There is a trancelike mode of engagement where your intuition informs every reaction. It is a rewarding experience to exercise that unconscious competence, and that is where the appeal of Scorcher is.

It is the game equivalent of the downhill ramps my friends and I built in my parents' driveway, and it is the feeling of having ramped so much farther this time than the last, and figuring out how to make the technique work even better.

It is also the feeling of blazing through that brutal track on Guitar Hero, where your fingers dance across the frets by themselves because they don't have time to listen to instructions.

If you can exercise the patience to develop competence in Scorcher, you'll find a deeply enjoyable experience that knows the reward of overcoming a solid challenge.

A throwback to the classic high score games. I actually liked it because I knew that going in. I think it's something fun to play in short bursts. I have not actually played any games by this developer but I will now check out some of their work.

The visuals were cool and I think that was what I liked most. I do agree above that shooting the worms would add some fun. This is more like a runner dodging game dressed up. Not bad to play in short bursts nothing groundbreaking but I don't think it was intended to be.