Thunderful Publishing and Studio Fizbin's comedic action game Say No! More is now available for iOS and Switch, with a Steam version set to release later today too. The developers describe it as a 'NO!-Playing Game' because it looks to explain that it's okay to say 'No' to people sometimes.

It plays out as a one-button adventure that takes place in a world where the word 'No' has been banished. You play as an intern, in a company full of arrogant and rude individuals who determine the value of a person by the amount of experience they possess. 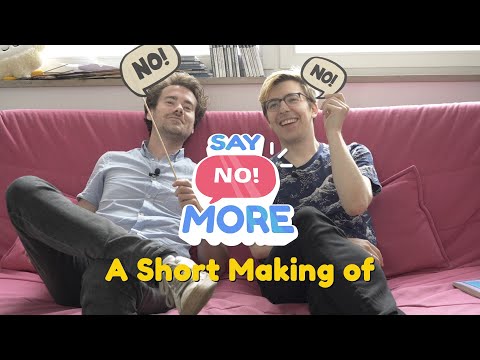 Eventually, you uncover a self-help tape called Say No! More narrated by Coach, a 'No!' expert. Their teachings and various songs motivate you to finally find the power within your self to say 'No' to whoever stands in your way, whether that's colleagues, CEOs or even your best friend.

Aside from simply learning how to say the word 'No', you'll also be able to deploy it in a variety of ways. For instance, you can scream it in a multitude of different languages or say it with numerous emotional afflictions so that your foe lets their guard down, allowing you to unleash an even more powerful 'No'.

Though it's presented in a silly and comedic way, Studio Fizbin is obviously trying to make a point with Say No! More. It tackles issues like social etiquette, friendship, and workplace standards, bringing more depth than you might initially expect. Jupiter recently had some hands-on time with the game and came away impressed.

Say No! More is available now over on the App Store, Switch eShop and will release on Steam later today. It is a premium title that costs $5.99 on iOS and $14.99 on Nintendo Switch.

Looking for more one-button games to enjoy on your phone? Here are 10 of the best available for iPhone and iPad
Next Up :
Honkai Impact 3rd is launching version 6.2 The Chrono and the Hare soon

Say No! More, the fun power fantasy game, will be heading for iOS, Switch and PC next month

Say No! More, the comedic power fantasy, will now release for iOS next year