Ruya is different. Ruya is calm and quiet and meditative. Ruya might be a game about matching things, but it's something more than that. It's an experience to quiet your mind, and one that never badgers you with IAP or garish colours.

The game takes place on a series of different grids. On each of these you've got a set number of coloured blobs to match. So far, so standard. The twist is, the game tells you which matches you need to make.

So while you choose the colours to get rid of, the game will tell you whether it wants a line of three or an L shape. And that adds an interesting layer to proceedings.

Then there's the fact you can add new balls to proceedings. Dropping them into spaces doesn't cost you any of your limited moves, and it means you can take control of your matching to some degree. 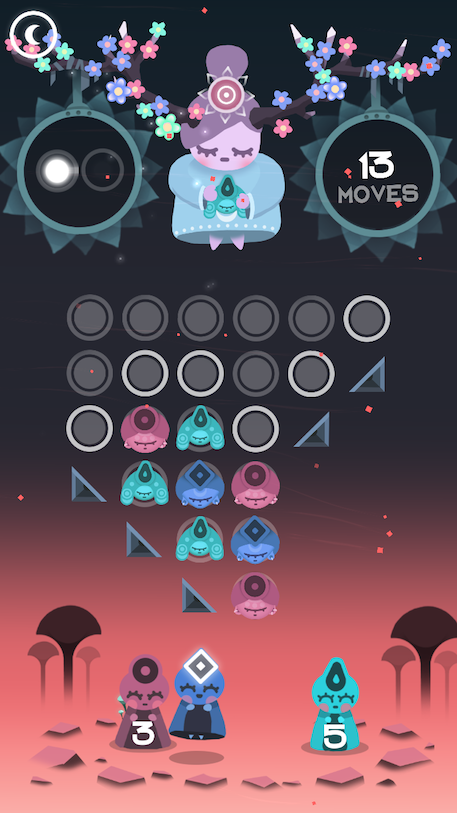 There are other additions too. Some of the shapes you're matching are encased in bubbles. Pop the bubbles and you'll get extra moves to use. There's no panic or time limit here though, just simple, elegant puzzle solving.

The game looks lovely too, and there's a story here told in little snatches that's intriguing enough to make you want to push on to see more.

No it's not frantic, and there are some who might find the pace a little bit too slow, but that's really the point here.

Ruya doesn't do much with the basic elements of the match-stuff puzzler, but it does it enough to set it apart from the rest of the crop. And its inherent aura means it's the sort of game you'll pick up just to have a play around with.

There's no revolution here, but if you're looking for a puzzle game that doesn't incessantly bark at you, then you're going to love it.

A calm and intriguing match-stuff puzzler that's likely to appeal to anyone sick of being shouted at
Next Up :
Roller Drama review: "Scheme with your team, skate great"

Relaxing puzzler Ruya should launch on iPhone and iPad this Thursday

Find a new level of calm in the atmospheric puzzler Ruya, coming to mobile soon