RPG Dice: Heroes of Whitestone is an upcoming tabletop-inspired character battler RPG, which is the product of developers from Electronic Arts, GREE, KingsIsle, and Zynga at WIMO Games. The game is set to launch in Q1 2022, with pre-registrations opening up now for mobile.

Dice is set in the peaceful and prosperous village of Whitestone. Peace has been maintained for over 500 years, but evil goblins, orcs, and elves led by a mysterious master from the Twilight Empire are here to take all that away. The lives of all the villagers have been shattered and it is up to you to save them. 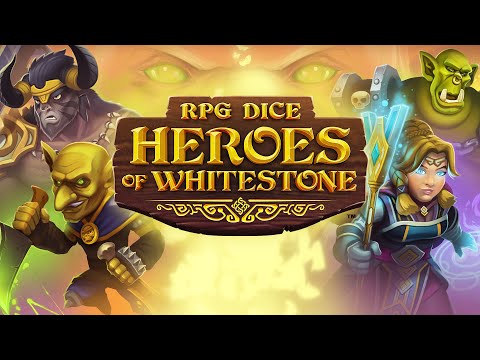 You must assemble a crew of heroes to accompany you through this daunting journey to end Whitestone’s misery. You will traverse through boardgame-like worlds where the dice is king. Rolls of the dice will determine your progression on the board and the kind of events that take place. It’s got a Dungeons & Dragons feel to it. Moving across the tiles will also earn you gear from treasure chests, which can help improve your stats by visiting a blacksmith. The map is also filled with various NPCs you can interact with to receive new quests.

In your quest, you will also come across many foes you must engage in battle. Your party of five heroes will go against the villains in a turn-based manner with the dice once again deciding combat results. With over 60 heroes to choose from, select the ones that suit your playstyle the best to create an unbeatable team. Equip these fighters with special items and dice to make them even stronger.

Newer RPGs always seem to feature a PvP mode now and even in Dice, you can enjoy some formidable PvP battles, create and join guilds, raid the Ziggurat and dethrone the Swine Chief Guild Boss.

Pre-register now for RPG Dice: Heroes of Whitestone on the App Store and Google Play. As pre-registrations increase, players will receive more rewards when the game officially launches.

Until then, check out the best RPG games to play on mobile!
Next Up :
GrandChase is celebrating its 4th anniversary with in-game events, free summons and more

RPG Dice: Heroes of Whitestone is an upcoming tabletop-inspired RPG landing on iOS and Android devices on January 18th