You're coming with me

Like every other Hollywood movie released in the last three years, José Padilha's upcoming RoboCop reboot will be supported by a free-to-play mobile game.

This time around, Contract Killer and Gun Bros developer Glu Games is at the helm of this movie tie-in game.

Glu has, in fact, come up with a third-person shooter where tin can man RoboCop will take cover before upholding the law with extreme prejudice.

You'll also have to dart between cover points to avoid sniper strikes, rescue human hostages, save informants, and battle robot baddies from the flick (like the EM-208 and the ED-209).

To help out, you can call on drone strikes and super-attacks; go on training missions; and use a heat vision scan to hunt down enemies and reveal their weak points. 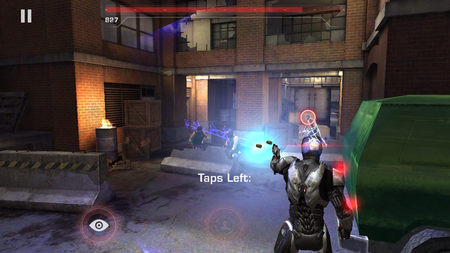 You'll also upgrade your suit and weapons, either with in-game funds or in-game purchases. Currency starts at £2.99 / $4.99. This is not only greedy, but also represents a wasted opportunity for an epic "I'd buy that for a dollar!" reference.

The game's also got an energy system. Because, you know, robot policemen who get tired after a few missions are very good at fighting crime.

RoboCop is currently in soft launch phase in Canada. It should be available around the world in the very near future. We'll keep you posted.

Note: This news article is based on a game in 'soft launch', so any prices and mechanics are subject to change before the game's worldwide release date.
Next Up :
GWENT’s winter update goes live tomorrow and adds new cards to each faction