"Natural sea kitten stocks are at an historic low, with many species nearing extinction," PETA writes in a widely circulated press release today.

"We are dismayed to see the killing of these creatures framed in such a casual manner - not for food, nor even for sport, but for fun."

If you haven't yet played Ridiculous Fishing, it involves your catching as many fish and other sea animals as you can on a line, hauling them out of the water, and shooting them with an array of weapons. It is, indeed, quite fun.

"Ridiculous Fishing even allows you to electrocute sea kittens underwater," the press release goes on. "This is a practice that resembles blast fishing - a widely illegal and very damaging method of sea kittening that still goes on today despite international pressure."

Something fishy going on?

PETA has made headlines in the past for publishing photographs taken inside vivisection laboratories, equating animal domestication to slavery, and comparing meat eating with the Holocaust. Its activists are also fond of throwing red paint at women wearing fur.

But in its lighter moments, the charity has itself dabbled in video games, releasing Flash satires of Mario, Super Meat Boy, and others.

In 2008, PETA attempted to rebrand fish as 'sea kittens', arguing that people would be more willing to consider the animals' welfare if they were furry and cute. 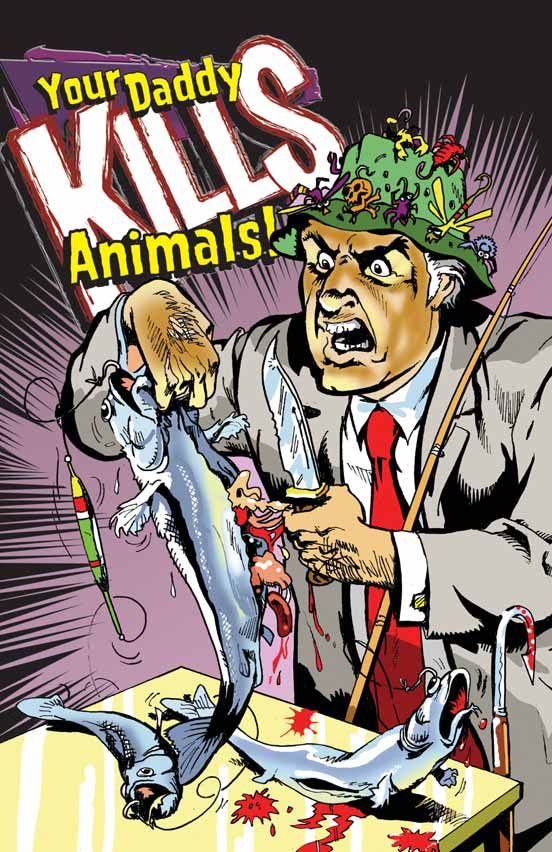 PETA has also released an anti-fishing comic-style pamplet, entitled Your Daddy KILLS Animals, in which it writes, "Imagine that a man dangles a piece of candy in front of you. As you grab the candy, a huge metal hook stabs through your hand and you're ripped off the ground. You fight to get away, but it doesn't do any good. That would be an awful trick to play on someone, wouldn't it?"

Fish contain omega-3 fatty acids, which have been shown to reduce the risk of high blood pressure, high cholesterol, and stroke.

PETA's press release concludes, "We call on this game's creator to remove it from sale. It may be lighthearted, but the real-world atrocities that it makes light of are deadly serious. It's simply not possible to make a game about fishing in a non-evil way."

Ridiculous Fishing is available now for £1.99. We urge you to buy it.