Airing it out on the gridiron.

Retro Bowl is a classic, mobile take on the popular American pastime. It takes many gamers back in time to the days of Tecmo Bowl or the old Madden games. Featuring its old school graphics and gameplay, you may start reminiscing a bit.

It's one of the few football games where you can touch every single aspect of the sport. From drafting rookies on draft night to calling plays and executing them on the field, you really get the chance to dabble with everything that football has to offer.

Another cool thing is that, with a small purchase, you can change the generic team's city and uniform colors to reflect those of NFL teams. Want to play as the Chicago Bears or the defending Super Bowl champion Kansas City Chiefs? You can do that, which is a nice touch. But today, we're going to chat a bit about throwing the football. The air game in Retro Bowl is smooth and a lot of fun, and we'll give you a few tips on how to tackle it. 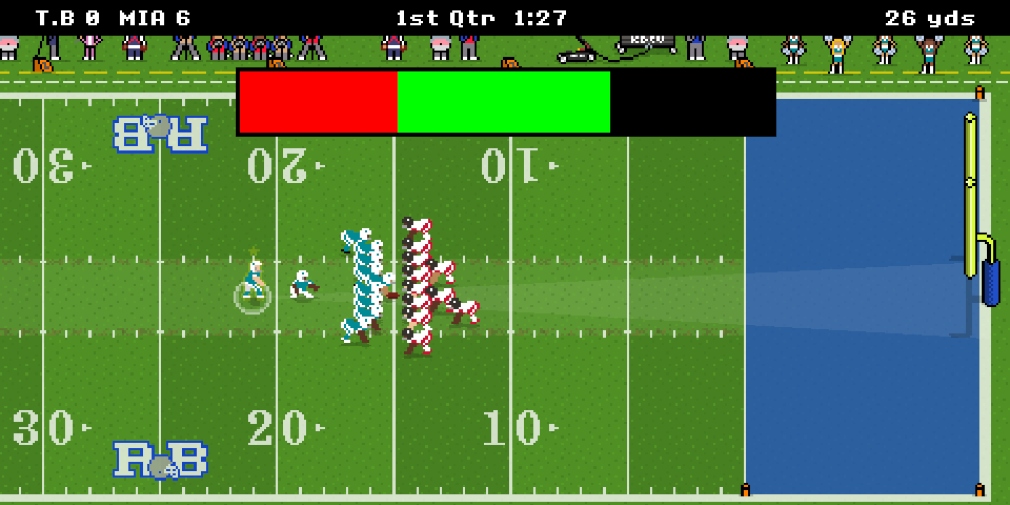 Retro Bowl is a football game, and in American football, you won't have all of the time in the world to react to things. However, if you feel like you're a quick thinker, survey the field when the ball is snapped and find that perfect target to throw to.

Many times, you'll see the play before you snap the ball and automatically have your eyes set on one specific receiver on that particular play. A couple of quarterbacks in the real NFL tend to make this mistake too. Instead of doing that, truly look at your options in motion and make the perfect pass.

Now, I know it can certainly be hard when you have a bunch of angry defenders trying to sack you, but do your best, and once you get comfortable with the plays and such, you'll be able to get rid of the ball sooner. Having some good QB vision is a great way to make some epic plays.

Speaking of getting the ball out quicker, one way to do this in Retro Bowl is by throwing some short passes. Many of the plays you call will offer some short routes for receivers. Take advantage of this as sometimes short, quick passes can throw the defense off.

They're also a good way to gain some yardage and trickle away towards that first down marker. Now, if you're struggling with shorter passes, then feel free to toss some longer ones. But, early on downs, if you're in a passing mood, then throw some shorties.

Running backs will usually run some slants when in a passing situation. Give them the ball and then do some footwork with him to try and push for the first down. If it's fourth down (and let's face it, most of us go for it on fourth), then go for a longer throw. Short passes are not the greatest in those spots. But keep completing, and you won't see fourth down too often.

Give The Running Back The Ball

This is something that we kind of mentioned already, but make good use of those RB slant routes. If you have yourself a good back, he could make some solid plays after the catch. I probably wouldn't try this on fourth down, but on second or third, sure; especially if you're near the first down.

Also, although this isn't passing, make sure to get some run plays in there too. It's always good to mix things up, and throwing in some run plays never hurts (well, unless you fumble, but that can happen with anyone). A running back is one of the most versatile positions on the field because of this.

They can run (of course), catch and return kickoffs too. You can make use of their speed with some sweet, short passes to them. If defenders are right there though, you can get stuffed. However, if you're quick enough and are good at juking, you'll have a great chance to gain a few useful yards or more.

0/3
Next Up :
Brave Nine tier list - Each character ranked by their class