Building your squad with the youngsters.

In Retro Bowl, you get the chance to play football in your own ways while enjoying a classic, arcade theme. As may have been mentioned before, it in some ways gives off a bit of a Tecmo Bowl vibe, and who knows, that could be the inspiration for this popular mobile football game.

Not only can you play games, but one of the coolest things about Retro Bowl is that you can call essentially all of the shots in management. From making trades to signing free agents and drafting players, there's a bit of everything that you can do.

Speaking of drafting, that is what we will be discussing today. Drafting is usually pretty easy to deal with within the game, and it's a lot of fun finding those potential future superstars. So here are a few things you should consider when heading into your first draft as the general manager.

Take a Look at Your Roster 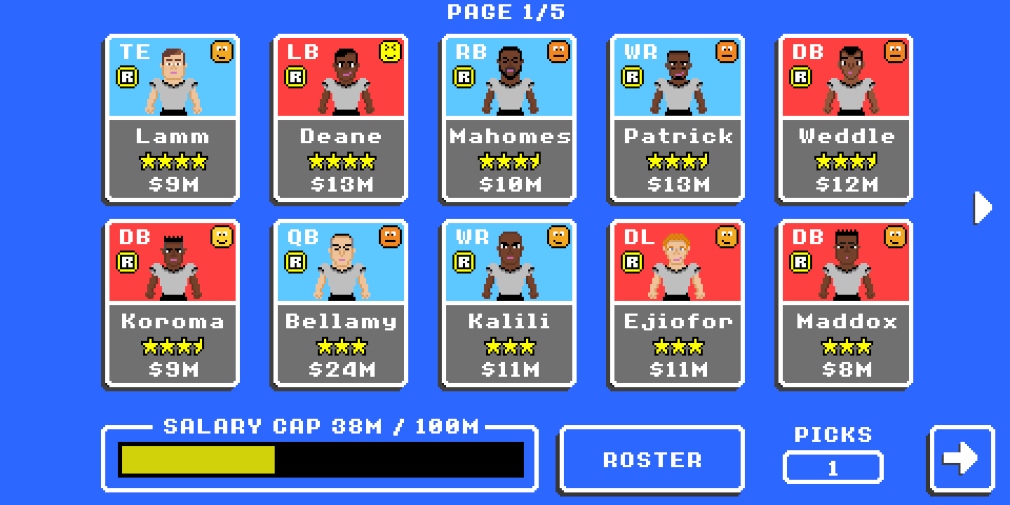 Before heading into the draft in Retro Bowl, it's a good idea to look over your roster. This is because you want to make sure that you're not overlapping at a position you don't need to worry about right now. Make sure you know you definitely need someone at certain positions.

Let's say you see a solid linebacker on the board in the draft, but one of the best players on your roster is a linebacker. That's where you may want to consider passing up drafting that player because he likely won't get much playtime.

However, if said star linebacker on your team is aging, then relying on the draft for a potential replacement is a good call. You just have to hope they perform well. So that's one reason why it may be good to skim through your roster before drafting but there are other reasons as well.

Unless your O-Line is absolutely stacked, don't be afraid to go after an offensive lineman in the draft. You'll have plenty of opportunities to draft players so there's not too much pressure on which players you select unless your team has a ton of holes that need to be filled.

The good thing about the offensive line is that many times you'll find some really good players later in the draft. This is nice because then you don't need to use your top pick as an OL all of the time. The reason why it's so important to stack up on the line is that it's great for your quarterback.

There's nothing worse for an offense than a terrible offensive line that gets your QB wrecked. Even if your QB isn't that great, a good line helps. Heck, if your QB sucks, you can still draft one (or go after one in free agency). But drafting can vary and it's up to you how you want to approach it. But if you can squeeze a good offensive lineman in there, then give it a shot.

Make Your Team's Weakness a Priority

One of the tougher decisions in Retro Bowl is who to go to for your first pick in the draft? This kind of goes back to looking at your roster, but look and see which position is the weakest. From there, proceed to draft someone at the position that needs it.

An exception would be at quarterback. If your QB is underperforming but is not considered the weakest position on your team, you still might want to draft a fresh QB since that position is by far the most critical in football. If the underwhelming QB is still super young, then I'd give it a little time.

But, overall, if there's an area that you know is going to hurt you if you don't address it, then go for it. But here's another little twist to keep in mind. Let's say that the punter or kicker is your weakest position; in this case, wait until the later rounds to fill those spots and you'll likely land a great kicker or punter. This will allow you to utilize your top pick on a position that beef up your offense or defense. Kicking is another highly critical aspect of the game, but luckily, there are some great ones you should be able to snatch up later in the draft.

0/3
Next Up :
Apex Legends Mobile Bloodhound Guide - Tips and tricks, abilities, and more

Retro Bowl: Tips to help you own the gridirion