It will launch with 95 levels

Reky is a puzzle game that's been created by the Greek developer beyondthosehills. You may be familiar with their previous game The Minims. Reky will be available on 10th October on iOS for £3.99/$3.99

It's a lovely looking puzzle game that makes use of a minimalist art style where the levels themselves are predominately black, white and grey with only a touch of colour. The backgrounds always seem to be a one-block colour with pink, yellow and blue on display in the trailer.

It's a very striking looking game that's sure to grab most people's attention even though it's not entirely clear what's going on by a quick glance. I also really like the visual style of the levels themselves. The developer says they're based on technical drawings and I can definitely see that. 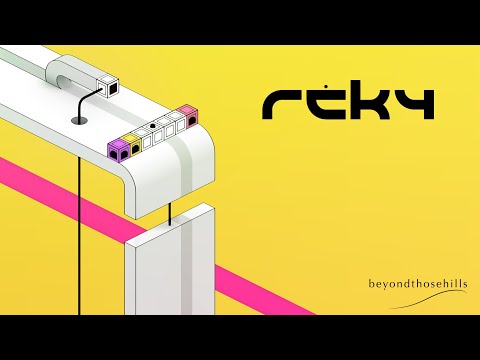 So what do you do in Reky? Well, using one-finger controls you will direct a little bouncy black blob around the level. The aim is to reach the end of each of the courses you'll be faced with. The little black blob will change colour when it lands on certain blocks, sucking the colour out of that particular cube. It can then transfer that colour to another block that will then move so you can access the next part of the stage.

There will also be portals to contend with that can warp you to different parts of the level. It all sounds fairly simply when you explain it, as puzzle games often do, but combining different colours of blocks alongside the portals and other mechanics will probably make for some fairly tricky puzzles.

If you enjoy a good brainteaser, then Reky will release on the App Store on 10th October. It will be a premium game that will cost £3.99/$3.99.

App Army Assemble: Reky - Is this Bauhaus-inspired puzzler a must-buy on mobile?