Everything is dancing. The lamp posts are dancing, the bus stops are dancing, even the piano suspended above the street by a wire is somehow dancing. And it's all because of me.

I'm a dirty street punk, stomping out of the record store only to find my new stash of vinyl catapulted out of my hands by a passing truck. Obviously the only way to get them all back is a rhythm-based endless runner.

But Record Run isn't any old rhythm-based endless runner. It's built by Harmonix, the studio behind Guitar Hero and Rock Band, and it wears that pedigree on its studded leather sleeve.

The game has just hit Canada as part of a soft launch, and I managed to grab some hands-on time with the beat-focused obstacle dodger. What I found was pleasantly surprising. 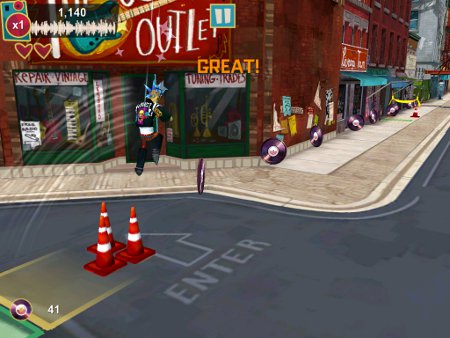 The game controls just like your common or garden endless runner. Swipe left and right to change between the two lanes, swipe down to slide under obstacles, swipe up to jump over them.

Spinning records litter the road, and they're basically currency to be spent on boosts and other attributes.

The big twist is you're actively seeking out obstacles. Pulsating green strips sit in front of them, and dodging at precisely the right time gets you a points bonus. Build this up and everything goes a little bonkers.

Each level is built around a song, and the pulsing green strips pop along in time to the beat. The closer your dodge is to that rhythm, the better score you get.

It's entirely possible to avoid all the obstacles just by swiping around them, but you'll be missing out on scores, and your star rating at the end of the track will reflect that. 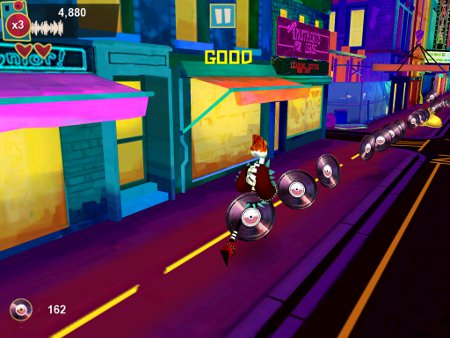 Music is in my bones

There are the usual challenges to try and complete. Polish off a batch of three and you'll get a couple of backstage passes. These let you add your own songs to the track listing.

They're handed out pretty liberally. You'll grab them for getting a 5 star rating as well, and you you can delete songs and replace them with others if you get bored.

New characters can also be purchased with these passes, so you need to balance listening to some new tunes with getting some new sprinters.

This being a free-to-play game, you could just splurge some cash to grab a bundle and buy everything. The IAPs aren't too obtrusive though, but you do get the odd video advert here and there as well. 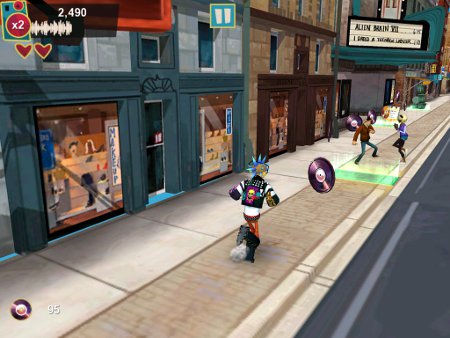 There's definitely a lot of promise in Record Run. Harmonix has managed to transfer the desire for perfection that made Guitar Hero so compulsive into an endless runner.

From the couple I had a play with, songs you add seem to convert pretty well, with different tempos and odd beats adding a new level of challenge.

It's possible things could get a little repetitive, and it did feel like the game could do with a couple of extra backdrops in my playthrough.

Hopefully that's something Harmonix can add before the game is released worldwide. As soon as we know when that's going to be, we'll let you know.

Note: This hands-on preview is based on a game in 'soft launch', so any prices and mechanics are subject to change before the game's worldwide release date.
Next Up :
Marvel Snap preview - "Fancy visuals and fast-paced card battling fun"