Put down your pitchforks (Updated: wait timers may not have been removed across the board)

iOS
| Real Racing 3
Updated on February 15th, at 18:10: The wait timers for repairs are back. In certain test regions, anyway. This isn't a massive surprise given Real Racing 3 is still in soft launch mode.

EA and Firemonkeys are presumably carrying out a few tests, experimenting with repair wait times, comparing the monetisation among territories, etc.

After two days of concentrated backlash to the freemium model employed in Real Racing 3, the Australian developer has issued a sneaky patch that fixes some of the most egregious issues.

Previously, you had to wait for your car to be repaired from all the dents and destruction that it suffered on the track. Now, repairs happen instantly.

Also, service wait times have been reduced by two thirds. You'll need to service your car after a few races, as your vehicle's tires, oil, and engine slowly degrade while the car is in use. 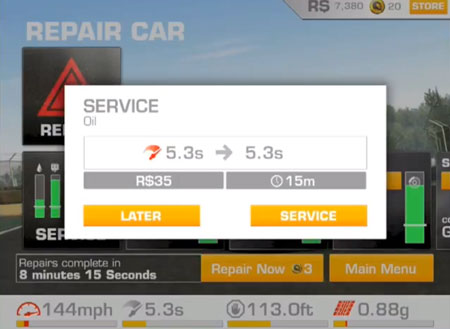 In this screen cap from our Real Racing 3 preview video, which we shot yesterday, you can see that an oil change used to take 15 minutes. 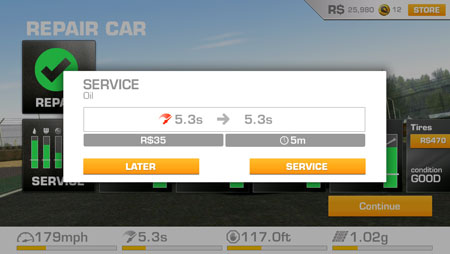 Firemonkeys made these changes without formally updating the app. This means that the developer has been able to tweak and tune the game without making you re-download the 700MB app.

Real Racing 3 is currently available in 'soft launch' state in countries like Australia and New Zealand. It goes global on iOS and Android on February 28th.
Next Up :
Clash of Titans is an upcoming title that's India's first-ever mobile MOBA game