‘Almost nobody' is paying for critically-acclaimed Punch Quest

But developer RocketCat plans to fix it

Indie game maker RocketCat Games has told Pocket Gamer that "almost none" of the half a million gamers who downloaded its free auto-run brawler Punch Quest have coughed up for the in-app purchases.

"Free games can usually expect one per cent of people to buy anything," says designer Kepa Auwae. "We're way, way under that. Maybe 0.1 per cent".

There are lots of possible reasons why the game isn't seeing a huge influx of buyers. "The Buy [In-App Purchases] button is really unassuming and hard for people to figure out, there aren't enough expensive items to buy, things like that," says Auwae. "It could also just be that you get coins way too fast in the game."

The designer - who enjoyed critical success with games like Mage Gauntlet and Hook Worlds - points out that other single-currency free games like Temple Run and Jetpack Joyride hand out coins much slower. "They still have a pretty fast rate, just not enough to get you a new unlock every game," says Auwae. "Whoops!" 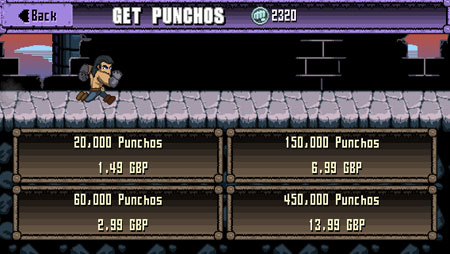 The studio isn't throwing in the towel, though, and is hard at work on a (second) update that will address some of these issues. It "should take at least a couple weeks due to approval times being long this time of year."

So, the big question - does the RocketCat founder regret going free to play? "As a paid app, we would have made much more money, but we wouldn't have been nearly as visible or gotten even close to as many downloads," explains Auwae.

"We really needed to get seen by more people, and Punch Quest accomplished that while giving us a ton of success with review scores from major sites and acclaim from iOS gamers."

"Other than the ‘it's making no money to speak of' part, we're thrilled".

Punch Quest is out now on iPhone and iPad for free. We called it "perilously addictive," and said that "mastering the fighting system is a thrill." If you fancy spending cash you can buy Punchos coins, and you'll get a free hat thrown in.