TGS2015: Hands-on with Project X Zone 2, the action-strategy RPG with all your favourite game characters

The more the merrier 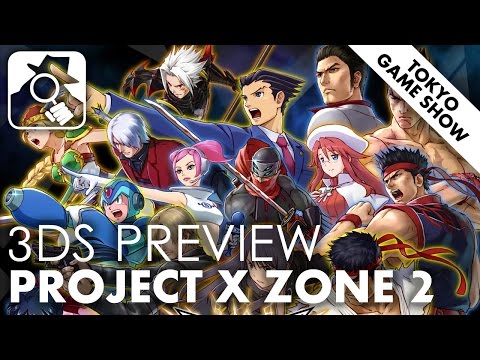 We ventured over to Tokyo Game Show last week to go hands-on with some of the most interesting games that'll be coming to the 3DS and Vita this year and next. One game we couldn't miss was Project X Zone 2: Brave New World.

For those of you who missed out on the first installment of Project X Zone, what we have here is an isometric Strategy RPG, much like Disgaea, only with 2D battling segments that focus on building up combos and dishing out as much damage as possible in real time.

The cross in the title symbolises the frankly ludicrous amount of crossovers in the game, throwing characters together from all manner of Namco, SEGA, and Capcom games.

As in the original game, in Project X Zone 2 you use both pair units and single units in battle. Pair units are the two main characters you'll be fighting with, while single units assist you in battle.

Some of the new pair units that have been announced include Ryu and Ken from Street Fighter, Phoenix Wright and Maya Fey from Ace Attorney, Lucina and Chrom from Fire Emblem: Awakening, and KOS-MOS and Fiora from Xenosaga and Xenoblade respectively.

You may have noticed a few of those are from Nintendo properties, which is pretty neat. That means we have characters from four of the largest game publishers in the world represented here. Not bad!

The characters I'm most excited to see are both single units, in the shape of Axel Stone from Streets of Rage as well as Segata Sanshiro, a character only real SEGA nerds know about in the West.

He used to advertise the Sega Saturn in Japan, and I was pretty bummed out to hear I missed his appearance on the Bandai Namco stage.

The isometric 3D grid and 2D battles seem very much the same as the original Project X Zone, although I'd say the art assets do seem a little sharper when battling.

This demo seems to be taking place in a sandbox test area to show off the characters and new animation, so it's tough to get an idea of what kind of difficulty we can expect and know where the story will be going, but no doubt many fans will be glad to see the mechanics haven't changed too much.

Project X Zone 2 will be coming to the 3DS this November in Japan, with the western release coming next February.