And why the game is never coming to mobiles

On a wet Friday morning in September, I made my way across London to speak to two developers who are responsible for one of the most iconic games franchises in the world: Pokemon.

Game Freak director Junichi Masuda and graphic designer Hironobu Yoshida talked to me about balancing the game's difficulty, new Pokemon that will show up in X and Y, and the likelihood of the series hitting mobiles or going free-to-play.

Pocket Gamer: How did developing a Pokemon game for 3DS compare to that of standard DS development?

Junichi Masuda: As the 3DS is more powerful than the original DS, previous limitations just go away. There's a lot more possibility, but we also have to do a lot more.

One example can be heard in the sound. Previous hardware meant we had to create music that would be processed on a sound chip synthesiser and that really limited what we could do with the music. This time though we can play music exactly as we created it. This gives us a lot more possibilities, but we have to really make the music live up to the power of the hardware.

PG: Yeah, I noticed the musical improvements. But why did you make some pokemon have their standard cries, and others - such as Pikachu - have cries from the anime series?

JM: Although all the cries of Pokemon in X & Y are new, they come from the same base sounds that we had originally used for them. With Pikachu we gave him special treatment as he's not only one of my favourite Pokemon, but he's also globally recognised as an iconic Pokemon. 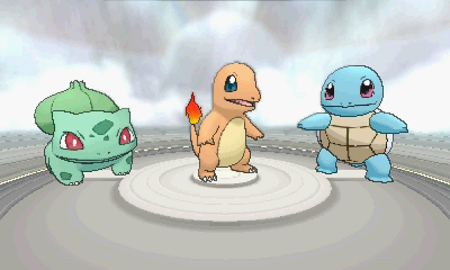 PG: What led to the decision to bring back the original three starter pokemon, and can we expect to see any of the legendary birds and dogs returning?

JM: In Pokemon X & Y we were really focused on putting a lot of Pokemon in the game, so this is really something I hope players will discover for themselves when they play...

I'm being so mysterious because this is the first time we've done a global simultaneous release and usually [Pokemon] launches in Japan first so information goes out on the internet and people know about everything before they have a chance to play anything.

This time I really want players to find things out themselves about what's in the world.

PG: Does this mean that they could potentially be included then?

JM: [Laughs] Perhaps… I just hope everyone will find out for themselves.

PG: Seeing as this is the sixth generation in the Pokemon series, do you find it hard to keep coming up with new designs?

Hironobu Yoshida: Of course it's a challenge to get the Pokemon right for the games, but we have 20 graphic designers at Game Freak and every day we're finding new ideas and new inspirations. So, whenever we decide to start work on a new game we're already ready to come up with new ideas for Pokemon.

JM: [Pats Yoshida on the back] Even when [Yoshida] goes to an aquarium or a zoo he probably can't have a good time there as he's always looking and trying to find ideas.

HY: Even if you take a frog as inspiration, you can create Froakie or Croagunk for example. There are a variety of different ideas for pokemon that can be created from just one species.

PG: What were the more standout features of previous games that you made sure you wanted to carry over to X & Y?

JM: I've always felt is very important is chance. When encountering pokemon, instead of having them visible on the field, being able to go into the tall grass and not knowing what's going to be within is really exciting. That randomness, that element of chance, really makes the gameplay appealing. 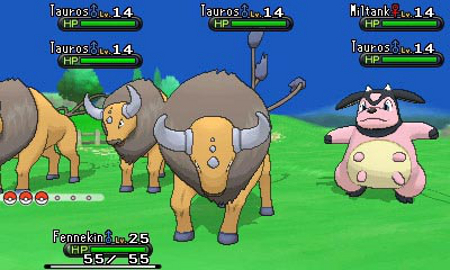 PG: We've seen some images of the Sky and the Horde battles, could you elaborate on how they work and where we could expect to encounter them?

JM: So for sky battles you participate in them by finding people we call Sky Trainers. These trainers are located either high up on a ledge or across wide ravines - places that you couldn't talk to them face-to-face.

What that means is that you have to have flying Pokemon who can go up into the sky and battle against each other, so distance is really important.

What we wanted to do was really create this expression where you're looking up at your Pokemon and the battle from below, shouting out commands to them. Up until now all your battles have been seen from just standing behind your Pokemon so we wanted to do something a little bit different.

When it comes to the horde battles, that came from one of the dilemmas with Pokemon where if we wanted to have challenging wild Pokemon we'd have to have them really high level. While that's good for an element of difficulty, if the player were able to capture that Pokemon it would destroy the element of balance in that area - as they're suddenly really strong.

In order to increase the challenge in an area and give it a sense of danger, we introduced these horde battles of multiple Pokemon in a group. You really don't know when you're going to encounter them either.

Individually, these pokemon aren't very hard. But, if you attack one, they'll all attack so you'll be hit five times if you don't manage to reduce their numbers quickly. It adds an element of difficulty and excitement, but it also encourages players to have a Pokemon in their party that has a move that can attack multiple opponents. 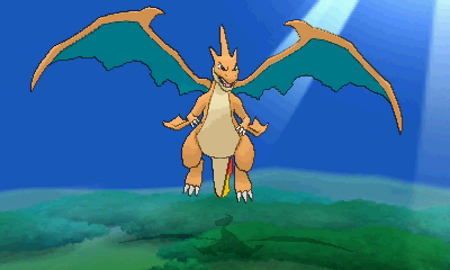 PG: Did this desire to increase difficulty result in the decision to bring in Mega Evolutions? And why have you decided to restrict them only to battles?

JM: When creating Pokemon X & Y we had three main themes. I mentioned beauty earlier, but there's also bonds (as in the bonds between pokemon and humans), and the other one was evolution. Evolution is one of the defining themes of the Pokemon series and we always try to make the new forms of Pokemon really exciting when they're seen for the first time.

However, if we just introduced a new level of evolution to make them all stronger, that'd just throw the battle balance out and ruin how things work. So, what we decided to do is restrict it to being in battles only, and also give an additional restriction of having the Pokemon holding a Megastone to trigger the evolution.

This prevents you from holding a different item that could be useful in battle, it also introduces a more strategic depth to battles too. If your opponent brings out a Pokemon that can Mega Evolve, you have no idea if they're holding a Megastone or a different item.

PG: As Pokébank will be a paid service, have you ever thought of going down the microtransaction or free-to-play route with the series?

JM: Definitely not with X & Y, we feel it's really important to have this complete game that can be played as is, so we don't have any plans to have additional DLC.

PG: Not even as an idea for future releases?

JM: [Laughs] Maybe! But not as long as I'm director. One thing I always say about the Pokemon games is that you want to make it something you can give to a kid - of course adults also play it too - and they have a complete experience.

Personally, I could easily put the game into a 2DS when it comes out and give it to a kid and leave them to play. I wouldn't want to give a kid my iPhone and do the same.

PG: As Pokemon has gained a lot of fan tributes and a few copycat games on mobiles, have you ever been tempted to enter the space yourselves with a companion app beyond the Pokédex?

JM: Things like the Pokédex and these companion apps really just focus on the data of the games rather than any actual gameplay.

Personally, I don't feel that giving a mobile phone to a kid for them to play is something I'd feel comfortable doing.

Our thanks to Junichi Masuda and Hironobu Yoshida for speaking with us. Pokemon X & Y launches worldwide on October 12th.
Next Up :
Fantasy Town Diary: Days 2-4 - more citizens, more style, and fresh bread