[Update] Did Apple give EA a 'truckload' of cash to hold back the Android version of Plants vs Zombies 2?

Cash for crocuses (Updated with a statement from EA)

EA has contacted us to state the following:

"A comment from an internal meeting taken out of context has created an unfortunate misunderstanding. Reports of a paid relationship between Apple and EA are factually inaccurate, and we apologize for any confusion."

So, it WAS said, but it was taken out of context. Well, that clears everything up nicely. I guess. Sort of.

We'll update the story with any further developments.

This story literally has all four of those things. That makes it a strong contender for news piece of the day.

According to Giant Bomb, EA's Frank Gibeau has told a team at the publisher that Apple gave it "a truckload of money" to delay the Android version of free-to-play tower defence sequel Plants vs Zombies 2: It's About Time.

Apple was quick to deny this suggestion, describing the content of the Giant Bomb piece as "not true". Which is a pretty strong rebuttal.

Giant Bomb states it has confirmed the quote with a number of sources who were at the internal EA meeting, and stands by its initial comment. 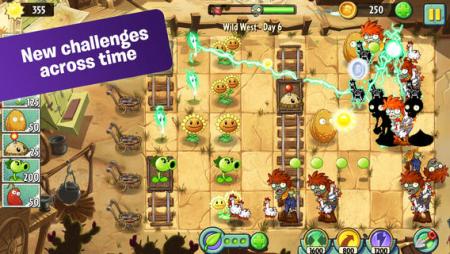 Rather 'helpfully', Plants vs Zombies 2 developer PopCap has chimed in with a statement that it "can't comment on internal meetings". Thanks, PopCap, glad you got involved.

It's not clear from the original report precisely what form of deal took place between EA and Apple. I like to imagine, though, that an actual truck of money rolled up to EA headquarters, with Tim Cook behind the wheel and Jony Ive feverishly drawing circles in the condensation on the windscreen.

Last but not least, Gibeau also confirmed during that now-infamous internal meeting that Plants vs Zombies 2 for Android will be out in the next few weeks. Sometime in October, then. Or maybe not, because he might not have said that.