iOS + Android
| Pirates of the Caribbean: Tides of War

Pop open the rum and prepare for a sea shanty — this May, Pirates of the Caribbean: Tides of War celebrates its third anniversary. Since launching in 2017, JOYCITY’s game inspired by the popular film series has been installed over a million times on Android alone, and it continues to attract swashbucklers across the world. To mark this milestone, JOYCITY is adding a bounty of content throughout May and hosting a competition.

Exclusive to players in the USA, there’s the chance to enter an upcoming social media sweepstakes. All you need is an active Tides of War account, an account on either Twitter or Facebook and to be aged 18+. On Facebook, simply like the official competition post, share and tag two friends, and mention your in-game name and server. On Twitter, it’s much the same: retweet the official post, tag two friends and include your in-game name and server. What spoils await the victors? The booty includes three silver 128-gig iPads and one pair of AirPods Pro.

There’s fresh content for everybody to enjoy, too. Tides of War, which combines base building with naval battles, features a star-studded cast of Pirates of the Caribbean characters. Updates continue to introduce more of the cinematic universe. Recently, favourites Elizabeth Swann and Will Turner made their in-game debut, joining the likes of Jack Sparrow, Armando Salazar and Davy Jones in the line-up of captains for hire. The third anniversary update adds to that list with tier-five tactician Erin Rogers, who specialises in evasion — helping you either avoid battle yourself, or chase down vessels attempting to dodge you. 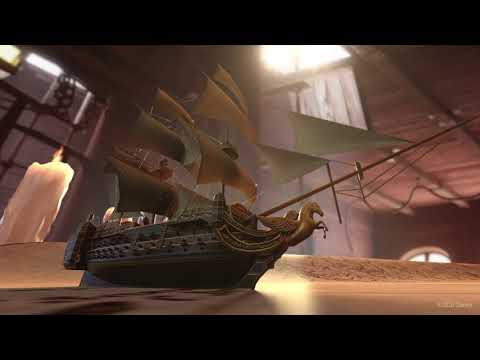 Last but not least, beginner pirates and seasoned sailors alike are sure to welcome the introduction of special gift boxes each time you level up. Expect a bundle full of ship blueprints, speed-ups, resources and other helpful items to kick-start your new level.

Season 5 of Pirates of the Caribbean: Tides of War is available now, introducing a host of new content