It's clear to see from oO's alpha trailer (embedded below) that we're going to be gritting our teeth in determined fashion in 2014 while playing this mobile dodge-'em-up.

Rainbow Train's oO is a minimalist arcade game in which you control the fate of a small triangle that is travelling through a gauntlet made up of a series of circles.

The triangle constantly spins around the inside of these circles. By tapping the screen, you cause it to move to the outside of them. With the right timing, you can move the triangle across the circles, one at a time. 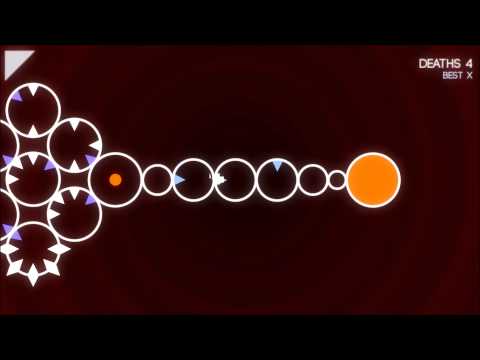 It's impossible not to compare oO to Ring Run Circus, which is a circus-themed take on the same idea. We thought Ring Run Circus's dev made life too complicated in the later levels, though.

This was partly because of Ring Run Circus's multi-faceted controls. Rainbow Train's minimalist take on the idea, however, involves just a single tap.

Rainbow Train also seems to be quite generous with checkpoints in oO, which should help us avoid getting too frustrated.

We'll have to wait until February 2014 to see if oO represents a marked improvement over Ring Run Circus. oO will be available for iOS, Android, and Windows Phone.