And a Mac. And OS X Yosemite

One of the coolest, and most hidden features in OS X Yosemite - the new Mac operating system which launched last week - is the ability to record footage from an iOS device.

It's really simple. Just follow this guide to get set up.

And then bam you get a video of your screen in the full Retina resolution. There's no lag, juttering, or frame rate drops - even in 3D games like Republique and Minecraft: Pocket Edition.

In fact, it's as good as the £100-odd Elgato Game Capture HD boxes we use at PG and AppSpy. 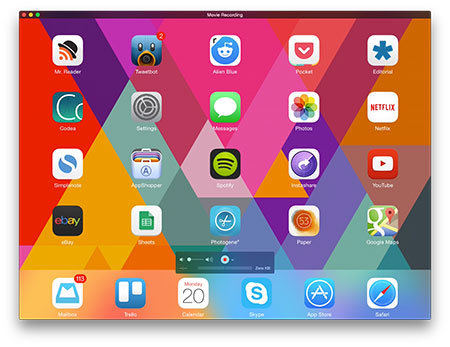 Sure, the Elgato rig has more options. You can tweak the picture settings, have way more granularity over the quality of the picture, record from your mic over the top of the game audio, and stream to Twitch.

But as a way to capture some footage from a game, make a let's play (you can record audio separately and sync later), create animated GIFs, or upload your replays to YouTube, this OS X solution is really quite awesome.

To give you a sense of what it looks like, here's a video. It's super short because the file sizes are utterly massive and my internet thinks 56k is something to aspire to. But you get the idea.

It's also on Vimeo because QuickTime spits out the video in weird resolutions (the same as the iOS screen) and YouTube doesn't play so nicely with those.

And here's how the video stacks up to something recorded using the Elgato card. The colours are actually closer to the real game on the Quicktime capture (though, you can futz with the colours in Elgato).

As far as I understand, this new feature is intended for app makers who want to record footage for the new App Previews on the App Store. But you don't need a developer account - just Yosemite, an iOS device, and a cable.