With the top-notch animation and the gorgeous battle sequences, it can be pretty hard to leave Mythic Heroes: Idle RPG on its own as you head off to do something else. Yes, IGG's new mobile title may be an idle game, but with the compelling nature of the gameplay and the multifaceted heroes' skills, tearing your eyes and attention away from your screen can be a challenge.

Typical of the genre, Mythic Heroes: Idle RPG lets you form a team of five and send your favourite heroes off onto the battlefield while you reap the rewards when the battle is over. There's your average auto-fight and speed-up function, as well as those AFK rewards you can rake in even when you're not logged into the game.

What makes this title unique is its clever use of an Astrolabe that definitely spices up AFK rewards as opposed to your boring ol' treasure chest. The Astrolabe is complex enough without being too difficult, as it's more than just tapping away to claim gifts every time you log into the game - and the gifts really are overflowing.

Rewards are generously showered upon you as soon as you start a new game, and you'll often pull an SSR unit to aid you in battle from the summons pool. The mythology-themed idle gacha RPG also doesn't disappoint with its roster of characters to choose from, as you'll be able to deploy iconic characters from Greek, Japanese, Norse, and Egyptian mythology to name a few. 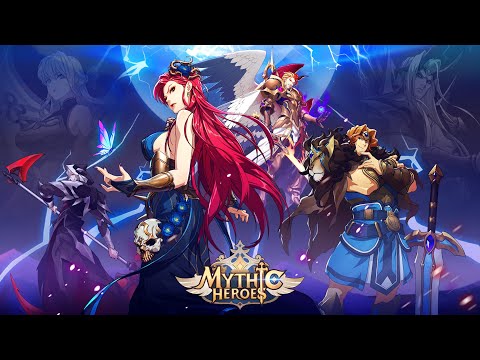 Character designs are absolute eye-candy too - every unit is reimagined beautifully to fit into the art style of the game, with stellar voice acting to really make those special moves they execute during 5V5 real-time battles as exhilarating as ever.

Of course, it's not just about the looks, either - characters actually do have a great variety to their skills more than just basic templates or skins. For one thing, there are four factions to consider, each with an advantage over the other in a rock-paper-scissors mechanic: Veridian, Luminarch, Guardian, Shadowarch. For another, characters can have beautiful synergy during combat based on their skills and on your formation, adding a layer of strategy to an otherwise AFK game.

For instance, I particularly liked how my two Tanks, Anubis and Athena, work pretty well together when it comes to protecting my squishier attackers in the backline. SSR Anubis can summon mummy minions behind foes to whittle away at their HP while SSR Athena can generate shields for the whole party to absorb damage. Both tanks, while similar in their party roles, have very different approaches to boosting my team's survivability, and it's a thrill to see.

While it may seem similar to AFK Arena at first glance, Mythic Heroes: Idle RPG does feel like it has more depth the more you dive deeper into the game. The immersive story will take you across nine major mythical worlds, and if you don't feel like going through the Main Campaign, you can always challenge your lineup's battle prowess at the PvP Arena or in the daily challenges.

The Pantheon, in particular, is a unique roguelite-esque dungeon available to challenge daily where you fight across a long stretch of enemies with random boons you may or may not encounter along the way. It adds a different kind of flavour to the gameplay whenever you need a break from all that idling. You can also have a look at the individual character's backstories in the Hero Portraits section, or simply marvel at the artwork whenever you need a breather.

Also particularly intriguing is the game's hero upgrade system, where you can feed dupes to Ascend your hero or use fodder to Enhance them. The equipment system lets you equip Runes rather than your average gear, and equipping certain synergies for elemental Runes provides you with an extra bonus buff. The summon system also lets you pick a specific hero to add to the summons pool, with limited UR banners you can save your diamonds for.

Overall, Mythic Heroes: Idle RPG isn't just your run-of-the-mill idle game that you'll log into and leave as you go about your day. It certainly has all the elements of an AFK game, but it's just too darn compelling to abandon by the side table while you're grabbing a bite to eat. There is, however, an auto-clear function that automatically moves you to the next stage of a fight without the need to manually clear each level, which is the pinnacle of idleness right there.

If you're eager to give it a go, Mythic Heroes is available on Google Play and the App Store to download now.

What's A Preferred Partner Feature?
From time to time Steel Media offers companies and organisations the opportunity to partner with us on specially commissioned articles on subjects we think are of interest to our readers. For more information about how we work with commercial partners, please read our Sponsorship Editorial Independence Policy.
If you're interested in becoming a Preferred Partner please click here.
Next Up :
Sprite Fantasia hands-on: sit back, relax, and have fun with your sprites