Is the newly launched arcade shooter My Friend Pedro any good? Let's find out

Devolver Digital has brought My Friend Pedro to mobile. I am well aware of the PC version of the game. I tried the game on my OnePlus 8 yesterday and had some fun. In this article, we will discuss the mobile version of My Friend Pedro and if it is worth spending your time and cash on.

Pedro and banana became friends in an action game released for PC and Console in 2019. Now DevolverDigital has brought the same adventure packed in a mobile game.

Story and Gameplay of My Friend Pedro

Pedro's entire fruitful family has been kidnapped, and now it is up to you to battle through around forty levels one after the other to save them.

Most levels are quite simple, where you have to pass through enemies and obstacles and reach the green door at the end. You get two guns with unlimited ammo to shoot down enemies and wooden boxes. Occasionally, you also get better weapons like SMGs, a Shotgun, but they come with limited ammo.

As you bounce off the walls, clearing stages, more complex obstacles and tougher enemies will appear. The more difficult levels will feature puncture-proof glass, swaying ropes, moving belts, and whatnot. It becomes really important to pay attention to the details if you want successfully clear the later stages. 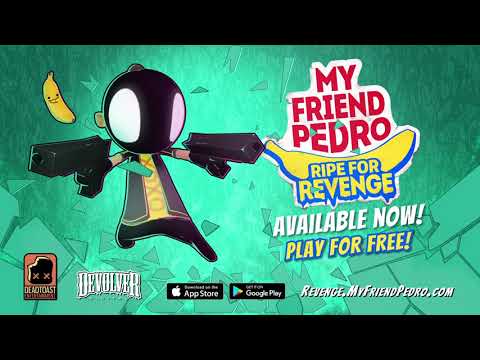 As for the controls and UI, it could not have been any better. You drag on the left or right side of the screen to make the character jump and you can simply tap on an enemy or object to shoot it. The controls are straightforward to learn, and it should not take you more than 30 seconds to get comfortable.

There are no checkpoints in the standard mode, which means when you lose all your hearts, you have to go through all the previous levels again.

Players can purchase an in-game premium account for just $2.99, which allows the players to continue from where they last left as well as return to any previous levels. Buying premium also unlocks 'Blood Rush Mode', where you have to complete everything from the beginning but within a very strict time limit.

My Friend Pedro is free-to-play and has no in-game ads. Furthermore, the game in no way forces you to buy premium. It's just that if you want to make the game a little easy for you and go for high scores, then you can opt for it. Overall, I am pretty happy with the way the game has been monetized.

I am so impressed by Devolver Digital. I thought that the mobile version would be very different from its PC counterpart, but the developer did a fantastic job optimizing the adventure for the mobile devices. The controls are a bit old school; a few players might find it difficult, but it was perfect for me. The game has excellent design and music. All I have to say in the end is that make sure to give it a try. It's a great time killer.

Players can download My Friend Pedro from Google Play or Apple App Store.