My Friend Pedro is coming to mobile in August

Devolver Digital is bringing My Friend Pedro to mobile devices in August after a small tease last week.

This version of the game is specifically built for mobile devices rather than being a port of the PC and console versions, and it’s called My Friend Pedro: Ripe for Revenge. It was teased last week on the official Devolver Digital Twitter account before being revealed today.

My Friend Pedro: Ripe for Revenge is a brand new mobile adventure full of blood, bullets, and bananas! Play for free on the App Store and Google Play starting August 5! Preorder at https://t.co/jnMWJ7NzxZ and peel off a free download as soon as it launches! pic.twitter.com/y9KnmAy8TB — Devolver Digital (@devolverdigital) July 5, 2021

My Friend Pedro: Ripe for Revenge seems to follow the same premise and general gameplay vibe of the original but is built separately for mobile devices. This means it’s not a straight port but has shorter levels, touch controls and performance optimisations that means it’ll play better on your mobile phone.

“They kidnapped his wife and kids and left him for dead,” the App Store listing description says. “But it's going to take more than that to split this banana's family. Help your friend Pedro serve some ice cold revenge, with a sprinkle of bullets on top!”

There are 37 levels overall in My Friend Pedro: Ripe for Revenge, and it includes a special Blood Rush mode where you put your skills with the game to the test. 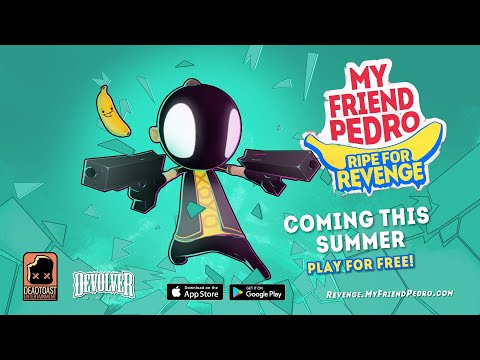 I never got round to playing the original game, even with its Xbox Game Pass availability, but this mobile release might be a good chance to check it out.

My Friend Pedro will release on the iOS App Store and the Google Play for Android store on 5th August. The opening few levels will be available for free with an in-app purchase allowing you to unlock the rest.

If you enjoy playing mobile action games on your iPhone or iPad, be sure to check out some of our favourite ones you can download on the App Store.
Next Up :
Pokemon Go's Hoenn Tour is taking place in Las Vegas, Nevada, in February 2023