MUL.MASH.TAB.BA.GAL.GAL
Insane title aside, MUL.MASH (which I'm abbreviating it to) offers an interesting spin on the classic Pong and Breakout formula. 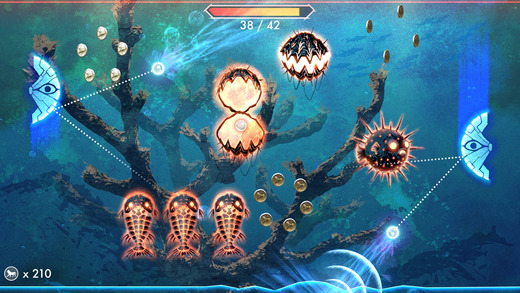 Basically, you have to control two paddles on the side of the screen, and bat balls at enemies to defeat them before they reach the top. You get the usual power-ups, upgrades, and the like, and it's visually interesting being set in the depths of the sea.

At review, we thought it was ace, giving it a Silver Award and saying: "Whatever genre this sits under, we need more of it. It's fun, pretty, and simple in the best way".

Okay, I'll give it a go
Not so fast! First you have to sign up to the App Army here, then write your name as it appears on Facebook in the comments beneath this post. We'll then select the lucky winners over the next few days.

We only have iOS codes for this one, but there's plenty of Android codes for other games coming soon so don't despair. We'll be back tomorrow with a brand new game so keep checking back at 5PM GMT.

What's the App Army?
The App Army is Pocket Gamer's very own community of mobile game experts. Each week, we provide them with a bunch of free codes and early access to the hottest upcoming games so they can provide their thoughts in features like this. We also host regular community-driven events with them in mind like tournaments, giveaways, and multiplayer evenings. To join, simply follow this link to the page on Facebook and request access. We'll get you in right away!
Next Up :
Top Ten Commanders in The Lord of the Rings: Rise to War

The oddly-named MUL.MASH.TAB.BA.GAL.GAL is Pong on steroids and it's out February 23rd