App Army Assemble: Mourning Star - "Is this existential action game worth your time?"

The recently released Mourning Star is described by developer Ben Russell as an "existential action game", an intriguing mix, for sure. It sees players swinging the last remaining star around space in a bid to save the universe while discovering yourself along the way. We decided to hand the game over to our App Army to see if they enjoyed the game's blend of action and narrative.

This seems like a pretty unique game, having to catch or alternately avoid certain objects caught in a gravity well. Initially, I had a bit of difficulty with the controls as it seemed like my finger was always going to cover what I wanted to see on the screen. But that issue went away quickly. I’ll be honest and say that while I found the mythical story and almost poetry interesting, it just didn’t really grab me. It is well written and I can see that a lot of thought went into it. As a writer, I can appreciate all that work. But purely as a matter of taste, as I said, it just didn’t grab me.

There is a mode where you can just go through the story without having to play the game, and maybe I’ll do that to get the whole story. And if that aspect appeals to you, I’d say go for it. It’s not too often you can get the whole story of a game without grinding all the way through the play. The music is a perfect match for the game and mythology, but I didn’t really care for it so I turned it off. As I said, controls worked fine once I got into the game, and I like this trend of being able to pause the game by raising your finger from the screen. Common sense! And the visuals were gorgeous. Simply a beautiful and ambitious game. It’s worth the buy to unlock the full game. 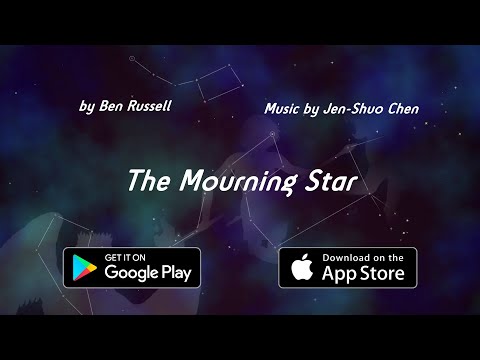 The universe is slowly dying, and as the last stars fade out, it is your duty to send all the cosmos to an orderly death. It is the only way to ensure rebirth. Brief cutscenes between stages advance the story. Mourning Star isn’t graphically outstanding but is pleasing to look at. Instead of a black background universe, shades of purples, blues, and black are interspersed with pinpoint stars. The animation is smooth, with brief slow-mo’s to accentuate effects. The impact and ignitions of various celestial bodies have their own distinct sounds, which are satisfying. The music, however, sounds like something from a new age massage parlour. It fits but gets to be a bit grating.

You wield the Mourning Star, the last burning star in existence. Your Star is connected to an icon that you drag to swing the star around, just like a…morning star. Heh. Honestly, this is where the game loses me. Despite there being different challenges of how to deal with each celestial body, and the dangers of the void, I quickly got bored with the gameplay. Despite the programmer’s efforts, you are essentially just dragging your finger back and forth. Mourning Star looks nice and tries to tell an interesting tale. Unfortunately, the gameplay rapidly becomes repetitive, and there’s not enough else to keep you here. This is a no-buy for me.

“The Mourning Star” is such a great example of why I love mobile gaming. What you have here is more of an experience rather than just a game that’s all made possible by a touch screen device. In a universe that is dying, “The Mourning Star” sets out to tell stories about the stars that helped to create it. This space adventure has you take control of the last star.

Exploring constellations with simple touch commands moving around the screen, you interact with objects in space representing the never-ending cycles of life and death. Beautiful artwork with wonderful music and sounds lends itself to feelings you can truly get lost in. On top of all this, what just might be my favourite feature that I really wish I’d see more of in gaming, is the option of story mode - no gameplay, only the story. This allows all users to progress throughout the game regardless of their gaming abilities.

In Mourning Star, it’s the end of time and with the last remaining star, you must do certain tasks (blow up asteroids and setting planets alight) whilst avoiding losing too much mass to the vortex. On completing levels you slowly fill out constellations.

Graphically and sonically it’s pretty basic but what lets the game down is controlling the star. You guide the star by touching an icon on the screen which the star then follows as if it was on a string. This makes guiding the star rather difficult, to say the least. Moving fast to avoid losing mass to the vortex gives you less control and accuracy, moving slowly means it’s too easy to lose mass and fail a level. I found this incredibly frustrating and the game is just not fun to play. Not recommended.

I found it hard to be too enthusiastic about this game. To be fair the graphics were colourful and there was a story running through it, though a little too zen for my tastes. The music, while definitely in keeping with the mood of the game, became monotonous and I switched it off. What I really struggled with were the controls. I understood the principles but time and again I found myself flying across the screen for no good reason and passing through a level more by luck than actual skill. It’s not a bad game but it isn’t brilliant either and I’m afraid it isn’t one for me.