Error 300 has officially announced Mosaic Chronicles, its upcoming story-driven puzzle game that's landing on both iOS and Android devices soon. The atmospheric game lets players move around and rotate stained glass pieces in order to form gorgeous mosaics in stunning colour, as inspired by the works of author Olga Gromyko.

In Mosaic Chronicles, players can expect “A Bit of Horoscoping”, which is the first story from the game's Steam release. The mobile port will also soon feature the second story, “The Lucky Knot”, in later updates. As for the original Steam game, the 1.2 update rolling out on March 7th will add more mosaics for players to tinker around with as well.

In case you're not familiar with the game, Mosaic Chronicles boasts beautiful stained glass pieces that players will have to form bit by bit. Each completed mosaic will complete a story as well, and players can view their masterpieces and revisit the narrative in their gallery. This will also serve as a sort of logbook for players to keep track of their overall progress across three difficulty levels. 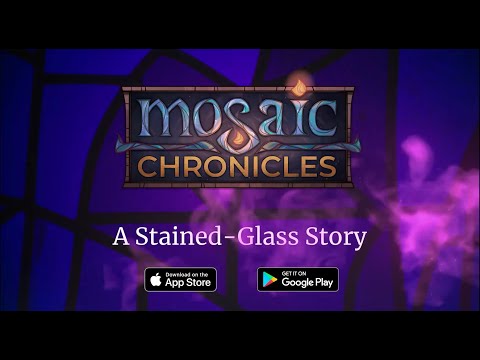 If you're keen on giving the game a go yourself, Mosaic Chronicles will be available to download on the iOS App Store and on the Google Play Store for Android devices on March 10th. It's a free-to-play game with an in-app purchase to remove ads. You can have a look at the trailer above to get a feel of the gameplay and visuals in store for you, or visit the official Steam page as well for a special discount from March 7th to the 11th.

Are you on the lookout for more similar titles that will put your skills to the test on your mobile device? Why not take a gander at our list of the top 25 best puzzle games for Android phones and tablets?

Next Up :
Labyrinth City: Pierre the Maze Detective is out now on iOS following successful release on PC and Switch

Mosaic Chronicles lets you piece together stained glass puzzles to reveal a story, out now on iOS and Android