Religious parody, praise, or just another Contra clone? You decide in side scroller Moral Decay

Perhaps for good reason, there aren't many religion-themed games on the App Store.

That's all about to change - although in which way will be down to personal preference - with the release of Moral Decay.

It places you into the sandals of one Chris T, who's back to save the world from Yakuza goons, wild animals, aliens, and the Dark Lord himself, down the barrel of a machine gun.

We caught up with founder Tim Omernick to find out a bit more about the thinking behind the game.

Tim Omernick: I wanted to make the Stephen Colbert of video games.

The motivation is supposed to be ambiguous. Am I a Christian and trying to make Jesus look like a total bad ass fighter trying to bring justice to sinners? Or is it satire about religion, pacifism, and hypocrisy?

I don't even know. It's for players to decide for themselves. So far, I've heard from people on both sides saying they are really into the idea.

What do you think Pat Robertson or Chuck Norris is going to say about it?

Actually, I would be honoured if either of them noticed or mentioned my game (and it might be good publicity). I don't think they will.

I'm assuming it's fairly tongue-in-cheek but, subject matter aside, why do you think Moral Decay is interesting in terms of gameplay?

I haven't seen many Contra style platform shooters on iPhone. If you search around, there just aren't that many. Maybe people think it's a controls problem, but Moral Decay controls pretty well.

So, besides the subject matter, I think it brings something else to the iPhone gaming scene. It's an attempt at creating a fast paced retro action shooter on this platform, which is sorely needed.

Does Chris T have any good catchphrases?

My favourite is "Oh my Father!", but I intentionally did not give Chris T a voice. It's easier for people to relate with him that way.

Thanks to Tim for his time.

Moral Decay is due out for iPhone, iPod touch, and iPad in the autumn. 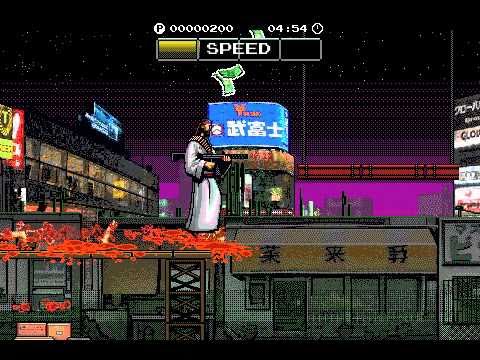 The Second Coming complete with chiptunes, 8-bit graphics and a machine gun