Dejobaan Games and Radial Games have announced the sequel to the hit visual novel adventure game Monster Loves You, which released all the way back in 2013. Monster Loves You Too! is a direct sequel and includes a lot of the same sort of mechanics and gameplay loops as its predecessor, but with tons of new spins on it along with some other surprises!

After emerging from a vat as a gooey, gross, naked, and fully alone creature, you’ll find yourself in the streets of Asch, a massive city of monsters, struggling to survive off scraps and garbage. As time progresses and you find your footing, you’ll end up forging friendships with some creatures, and rivalries with others. 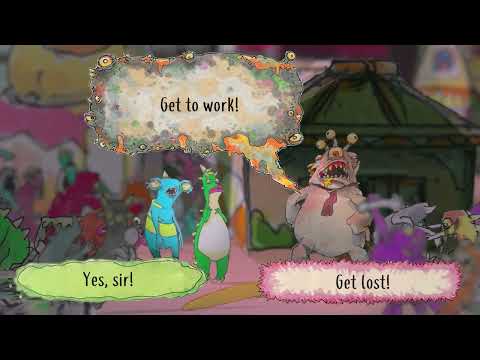 As you manage those relationships, you’ll also have to manage your own urges. You’ll have instincts as a monster, coming in the form of three stats; Greed, Malice, and Docility. Greed is your desire to hoard wealth and trinkets, stealing from others. Malice is your inner desire to just tear into those weaker than you. Docility forces you to be lazy and relaxing when you should probably be working instead.

Of course, these instincts of yours are backed up by three other positive stats, so not all is as grim as it seems. Using your Brains, Guts, and Flesh, you’ll be able to overcome those bad instincts. Your Brains is your ability to persuade others, intellectually consider options, and that sort of business. Your Guts allow you to stand up to danger and make yourself heard. And your Flesh will allow you to defend yourself properly, making sure you don’t get mortally wounded.

Using all of these stats combined and managing relationships all while doing what you can to eat and simply survive, you’ll attempt to grow old and healthy within the city of Asch, all while also unravelling a deep political conspiracy at the centre of the city itself.

If an engaging and deep storyline told through a graphic novel style of art with visual novel gameplay sounds up your alley, you’ll be able to dig your teeth into Monster Loves You Too! this December, so stay tuned for more news and trailers as they release! In the meantime, you can also check out the official website for those news releases as they drop too!