iOS + Android + Windows Phone
| Modern Combat 5
Updated on July 24th, at 12:01: Modern Combat 5: Blackout is all the way out now, so you can get your hands on the grunty shooty action on your device of choice.

You can even grab it on Windows Phone if you want. Imagine that.

If you'd like to find out what we thought about the game, all you have to do is click right here to read our full review.

Want some tips to get you started? We've got you covered with our field guide feature. Don't say we're not good to you.

Updated on July 23rd, at 18:40: It looks like Android fans are getting a head start on the action, as Modern Combat 5 just landed on Google Play.

It's gonna cost you £4.99 / $6.99, and works on a bunch of devices. But it doesn't look like it supports controllers (it doesn't on iOS - though let us know if it's different on 'droid), and it needs an internet connection to play. 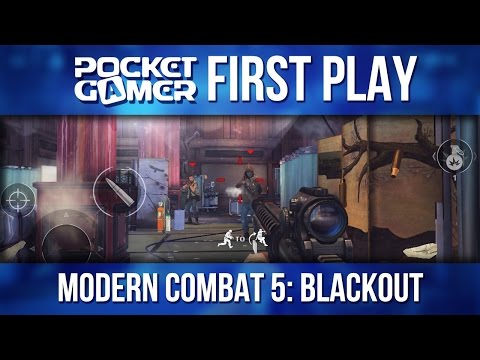 It's an impressive-looking new entry to the series that sees you taking on a globe-trotting campaign, getting embroiled in conspiracies, and looking on in wonder as you pump strangers full of hot justice bullets.

There's a hefty multiplayer mode as well, and your progress from each chunk of the game is amalgamated, meaning kills in single player get you XP to play with when you're gunning down your friends.

While there are no IAPs, the game does demand that you're always connected to the internet, which is a bit annoying if your 3G isn't great. And let's be honest, if you live in the UK your 3G probably isn't great.

Modern Combat 5: Blackout will be hitting the UK later today. When it does it'll set you back £4.99 / $6.99.
Next Up :
Horizon Chase Mobile Edition's new China Spirit DLC features new tracks and the Lightning car, available now