Gameloft's latest gung-ho shooter, Modern Combat 5: Blackout has just breached the front doors of the App Store and Google Play, and is now shooting everyone in slow motion.

Download this game and, once again, you'll find yourself hopping from country to country, murdering foreign jerks in the face. And then going online to murder more people in the face, but this time they're humans.

To help you get started, we've put together some handy advice for the game. This covers everything from getting your controls set up perfectly to best practices in combat to unlocking new toys for your guns.

Let us know how you're getting on in the game, and share any advice in the comments below.

Tweaking the control layout to your liking can make a dramatic difference to your speed, accuracy, and survival. But it's all about personal preference.

To begin, start a mission, hit pause, and choose 'customise HUD'. From here you can move every virtual button on the screen, change their size (use a pinching motion), and tweak their opacity (use the slider in the middle). 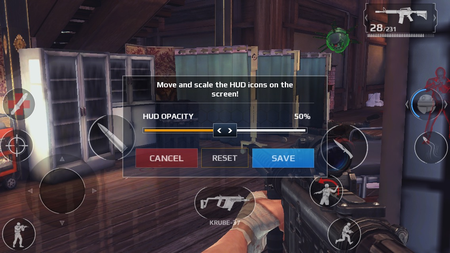 Personally, I like to put the shoot button on the left, just above the movement joystick. This way I can aim with my right thumb, and fire with my left. It's weird, but it works.

That means it's rather useless for the fast-paced world of multiplayer. But it works well with the more deliberate pace of singleplayer. And for turret, breach, and sniper missions where you can't move anyway? It's perfect. 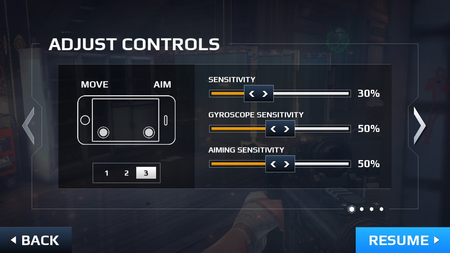 You can also try the third control method (hit 'controls' in the settings and press '3' under the picture of a phone) where you move with the left stick, aim with the right, and shoot by tapping the middle of the screen. It's fiddly, but can work well.

And if you're really struggling, turn on 'auto-shoot'. Now, your weapons will automatically fire when you aim at an enemy. It only works in singleplayer, and it will make the game quite easy, but it's good for beginners.

And finally, you can turn on 'gyroscope' if you'd like to aim by wiggling your phone, and 'Invert Y-axis' if you reckon up means down and down means up because you are an aeroplane.

Want to know the single-most important bit of advice for Modern Combat's singleplayer? You are practically bulletproof when crouched behind a knee-high obstacle, and you can still shoot at enemies at your leisure.

Slowly but surely moving between these cover points, and then taking out the enemies that pop out of hiding like you're playing Virtua Cop, can get you through almost any level.

To help, you might want to turn off 'auto-sprint' in the settings. You'll have to manually hit run to move quickly, but this will stop you accidentally standing up when moving behind cover.

There's also 'auto-crouch' (singleplayer only) which makes you automatically get behind cover when you approach an object. Here are some other tips: 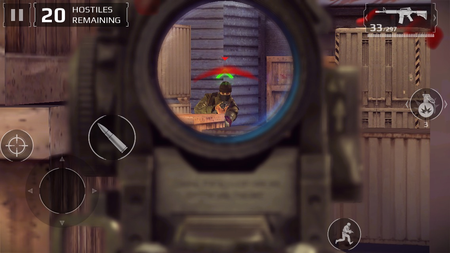 You accuracy - shown by the size of the crosshairs - changes based on what you're doing. It's worst when running, not great when walking, fine when standing, brilliant when crouching, and pinpoint when using a scope or iron sights.

You can shoot enemies through some thin walls and materials - again, your crosshairs will go red if you can make the shot. Use your scout drone to outline enemies and then aim for the head. 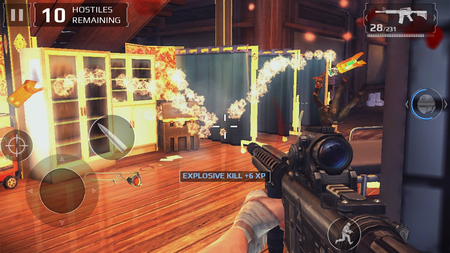 Shoot barrels, gas canisters, and propane tanks to cause explosions and kill nearby enemies. You'll know if a barrel can be shot if your crosshairs turn red when aiming at it.

If you find yourself carrying the completely wrong type of weapon for the level at hand, switch to your pistol (swipe left on your ammo count) or pick up an enemy's gun.

Levelling up and kitting out 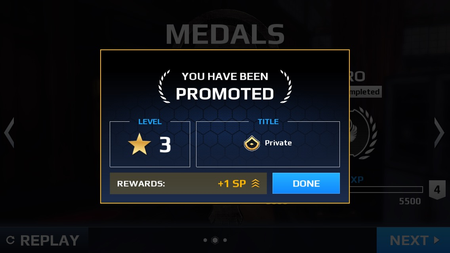 General XP is earned by finishing missions, and completing those three star objectives. You can return to old missions to grind for XP, but the payout is dramatically reduced.

You also get XP for every kill, with bonus points for headshots, explosive kills, multi-kills, and other efficient ways of murdering people.

And then there are medals - like 'accurate' (get over 50 percent accuracy), 'marksman' (get five headshots), 'executioner' (get ten kills), and 'sharpshooter' (three kills in two seconds) - for more XP. 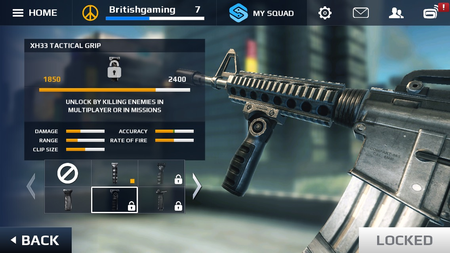 Each weapon has its own experience meter, which is raised by killing people. One kill adds ten points, and earning points unlocks new optional attachments (such as muzzles, grips, scopes, and clips) for that weapon.

Also, getting kills with weapons in one class (that's assault rifles, SMGs, shotguns, sniper rifles, rocket launchers, and pistols) will unlock the next gun in that group. 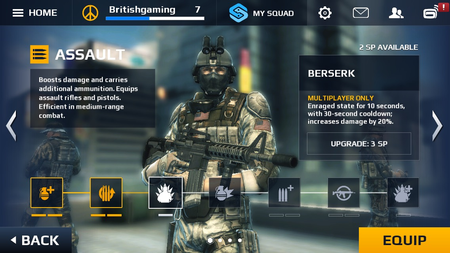 And finally there are skills. These are specific to each class and can be found on the class screen. You need to unlock them in order (but can upgrade them to rank 2 later) and that costs SP.

You get SP by being promoted, finishing certain missions as shown on map (this only works once), and completing events.