MMA Manager is for those who like the idea of fighting for sport but don't want to get their own face bruised and cut (and who does, really?).

You'll train them up from dominating the local scene and, hopefully, all the way up to the big commercial events.

Doing this involves recruiting the fighters and coaches, upgrading your gym and its equipment, and generally keeping your fighters happy.

The latter involves being a little more hands-on. You might have to deal with "issues like missing weight, injuries, and PEDs."
Other times, you might stand in the corner of the ring during a fight and give your guy a pep talk. 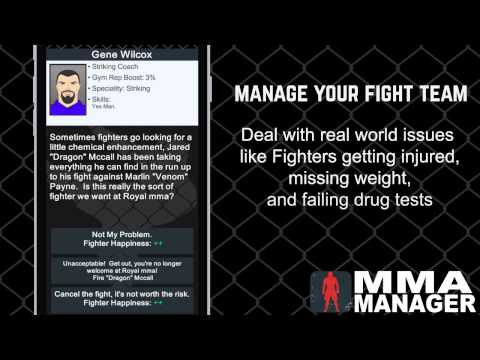 There's also a touch of cruelty to the game that may reflect the nature of the sport.

Let's say one of your fighters gets beaten up badly in a fight - it's going to take a lot of work to get him fighting fit again. Rather than do that, you could get rid of him and hire a new fighter, start afresh.

If you reckon you've got the grit needed to take on the role then you can purchase MMA Manager for £1.99 / $1.99 on the App Store.