150 baddies on-screen at any one time

It's been more than three years since Mountain Sheep's Minigore shot its way onto the App Store, but a sequel hasn't materialised. Yet.

We say 'yet' because it looks like Minigore 2: Zombies might be on its way to the App Store in the near future.

This sequel, much like its predecessor, will be a top-down twin-stick shoot-'em-up. Minigore 2: Zombies (which looks gorgeous, by the way) packs an extra punch, though.

For example, Mountain Sheep has tweaked its game's engine so that it can now cope with around 150 bloodthirsty critters on-screen at any one time. 50 different varieties of enemy and seven different boss battles will also hinder your progress. 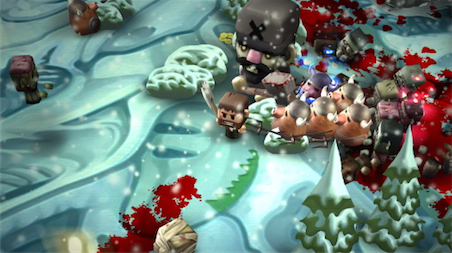 Minigore itself was packed full of unlockable characters, and its follow-up is no different. There'll be 20 different characters available at the game's launch, and they'll have a mix of melee and ranged combat skills.

We don't know when exactly Minigore 2: Zombies will be released. We don't know how much it will cost, either. It'll be a Universal app, though. We do know THAT much.