Orange Pixel's games have all been linked by their focus on fast-paced action, and the new Meganoid remake carries that pace into a more open structure inspired by Spelunky and similar games. While the mechanics and challenge keep your many runs exciting, poor controls keep this platformer from being one of the genre greats.

You're the only hope against the deadly threats within the Meganoid spaceship, forcing you to dive into its randomly generated floors to explore, fight, and upgrade yourself. Meganoid combines the unpredictable stages of a roguelike with the timing and challenge of a platformer; it's a hybrid that has been done excellently in other games, and Meganoid certainly brings its own style to the formula.

Levels are tight and cramped, thick with hazards ranging from lasers and spikes to missile turrets. This mean the action is often relentlessly hectic, challenging you to deftly leap over rockets and spikes while shooting enemies and dodging rotating turrets. 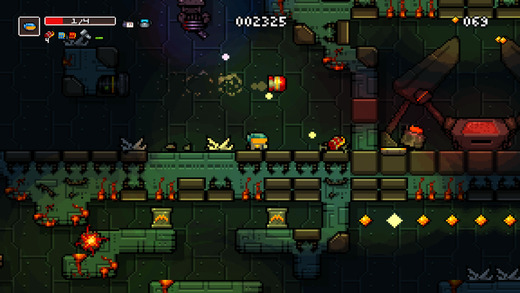 The game's roguelike DNA means you'll find special items and upgrades through levels, encouraging exploration to collect them and scattered coins to purchase hacking abilities. These perks and tools are varied and always change your moveset in interesting ways: jetpacks to dash over spikes, double jumps to access hard-to-reach areas, offensive weaponry, EMP gadget to disable turrets and robotic foes, and much more.

You'll need all those abilities to survive Meganoid's increasingly challenging stages, which grow even tougher when security drones begin spawning to chase down slow players.

Missed it by that much

Timing is everything in Meganoid; a poorly-timed jump or move will see your armored hero blasted, bashed, burned, and skewered. The precision platformer roots of the game, seen in the original Meganoid, are well represented in this iteration. Unfortunately the controls don't feel up to the task up navigating those precision challenges.

In roguelikes in general, the last thing a player wants is to die not due to poor decisions or an emergent situation, but because of imprecise controls. And that is even more true for the roguelike platformer. However Meganoid's controls proved to be frustrating at times, usually after trying to jump up a narrow passage and grab onto a specific ledge or being killed by spikes that seemed like they were jumped over cleanly. 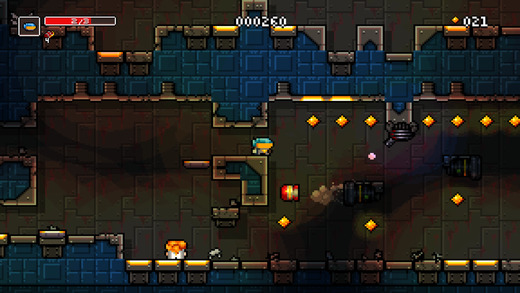 This, combined with enemies rushing at you from off-screen and the random generation sometimes placing spikes and platforms in unfair spots, makes Meganoid's a flawed but fun platformer.

The variety and fast pace will please those looking for a more arcade-y take on the genre, but the controls and other design choices might hinder some of that enjoyment.

Frustrating control issues hurt this decently challenging and varied roguelike platformer
Next Up :
Hundred Days review - "A success for the management genre"

OrangePixel will bring a dozen of its latest games to Switch, starting with roguelike Meganoid next month