Change history by saving the dinosaurs in Mechanosaur Hijacks the Moon, out for iOS on July 30th

We all know how the dinosaurs were apparently wiped out. A meteorite hit the Earth and -kablam- no more Mrs. Rex.

In Mechanosaur Hijacks the Moon you will travel back in time and prevent that tragic event from happening.

Note that you don't play a human looking for a future in which you have to run away from velociraptors on the way to the supermarket.

No, you play a robotic dinosaur with immense power, enough to (as the title says) hijack the moon and speed up and slow down its orbit.

You speed the moon up in the game by simple holding your finger on the screen. By doing this, you can position the moon so that it directs the meteorites away from the Earth.

It's hardly the first game that plays like this, but hey, it does have a robot dinosaur in it. And it has a "tongue-in-cheek random insults generator" that jabs you upon obtaining a low score. 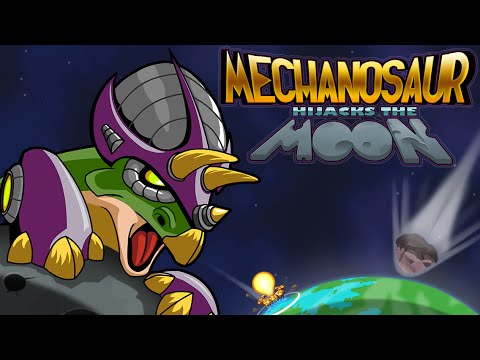 Plus, this is the game that developer XperimentalZ Games (creator of Pixel Boat Rush) is launching to mark five years of creating mobile games. That's got to be worth a look, surely.

Mechanosaur Hijacks the Moon will be available on iOS from July 30th onwards. An Android version will arrive soon after.

It will be free to download, supported by ads, as well as video ads that boost HP by 25 percent for three games. Or you can pay £1.49 / $1.99 to remove all ads and get a permanent HP boost.

Out at midnight: Mechanosaur Hijacks the Moon - Endless Earth defender