So you suck at PS Vita's sepia shooter, Luftrausers.

It's okay - you probably just need to choose a better plane. Because while practice, sharp reflexes, and a deep understanding of each enemy's attack pattern are all vitally important, choosing the right rauser is the real key to success.

However, with some 125 combinations to choose from, and loads of different weapons, bodies, and propulsion systems to pick, it's hard to know exactly which one is going to net you the best scores.

But who better to ask for advice than the guys who have spent the last two and a half years painstakingly play testing it - two-man indie studio Vlambeer, and its closest collaborators.

Here's what the experts are flying, these days. 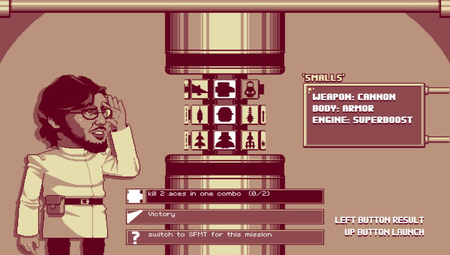 Rami Ismail, the business and development half of Vlambeer, totally cheated and picked two.

He likes to rock the 'Smalls', which is a mix of cannon, armour, and super boost, which offers "super high damage and easy splash damage, but requires a target".

It's that's undergoing repairs, he can be found flying the 'Relicrouser', which combines missiles, melee, and gungine - "I'm just nostalgic - it used to be the most powerful rauser in the game, but we tweaked it and now it's useful mostly for specific uses". 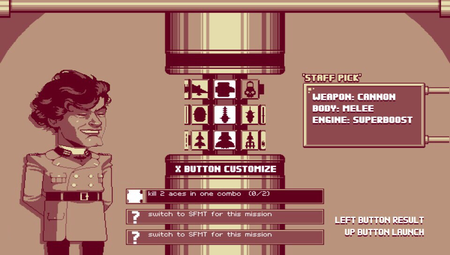 Vlambeer's Jan Willem Nijman (aka JW) likes the aptly-named 'Staff Pick', which combines the cannon, melee, and superboost bits. It "can take out a battleship in one perfect swoop if timed perfectly".

Luftrausers started life as Flash game Luftrauser. JW prototyped the first build of the overhauled semi-sequel Luftrausers on an airplane out of 2013's Game Developers Conference. 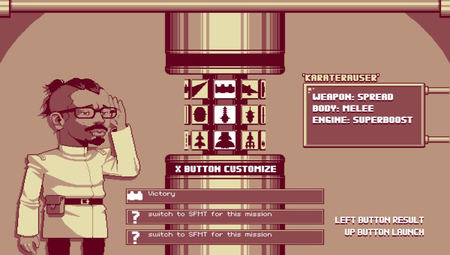 Did you know - changing your weapon loadout also changes the chiptune instruments of Kallio's soundtrack? But not the pause music, which happens to be based on the shop theme in Ridiculous Fishing. 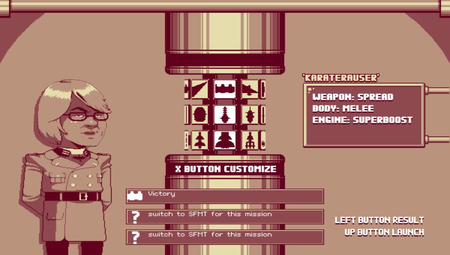 Paul Veer was one of the artists on Luftrausers. He has also offered his pixels to Nuclear Throne, Hunger Games: Girl on Fire, and Hyper Light Drifter.

He also picked the Karaterauser (shotgun [spread], melee, superboost), prompting Kallio to call him a copycat. That's totally justified. But maybe there's something to be said for this popular loadout… 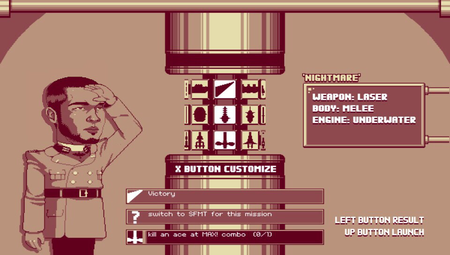 "High risk kamikaze, skimming the surface of the water and taking down boats along the way," explains de Groot. And if you need it, "take some time to heal while underwater!"