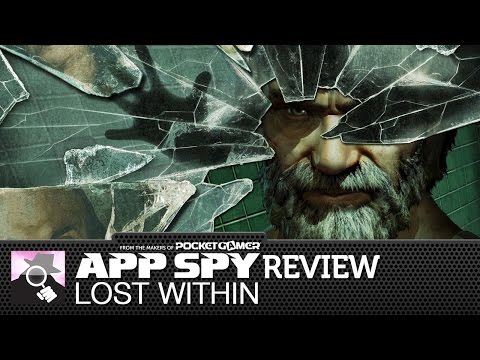 Sometimes it feels a bit like Lost Within isn't really trying. Its scares are big barks, its setting is a spooky asylum, and its monsters are, well, they look a bit like emaciated backpackers.

Plus it starts off closer to the psychological end of the spooky spectrum, but soon meanders into slightly bonkers supernatural claptrap. But there's enough here that, if you're a fan of the horror genre, you're probably going to enjoy it.

Get to the locker

You play a police officer performing a final sweep of an insane asylum before it's demolished. Inevitably there's a creepy kid living in the walls and a bunch of crazed inmates stumbling around trying to mash your brains in.

Tapping on the floor moves you around, and there are glowing objects here and there that you can examine. These usually tell you some of the asylum's history, or give you equipment you can use to stay alive.

Everything is suitably dank and unpleasant, and there are flashbacks that see you jumping into the past to experience the asylum in its hey day. That hey day mainly involves patients being eviscerated alive, though.

The majority of the gameplay involves getting around the monsters that stalk the halls and corridors. You can fool them with decoys, shock them with stun guns, or hide in lockers while they wander past grunting and slobbering.

The controls are often a little sticky, and there were times during my playthrough where I ended up stuck in a door, which sort of ruins the creepy atmosphere the game's trying to foster.

Can't we just stop and ask for directions?

Lost Within isn't particularly scary. It might make you jump a couple of times, but there's a lack of tension, and to be honest the bad guys are more funny than threatening.

That's not to say there isn't some fun to be had here, and there's a pop and fizz to the story that'll make you want to see it through to the twisty turny ending. Just don't expect to really freak yourself out while you're doing it.

More jumpy than scary. Lost Within has a few nice ideas, but it won't leave you psychologically scarred, which is a shame
Next Up :
Catalyst Black review - "Gorgeous visuals, smooth gameplay and fun-filled fights"