If you're a player of a certain age, then it's a good bet you've got a soft spot in your heart for Lemmings. In fact, the older you are, the stronger that connection to the game is likely to be. Played Lemmings on an Amiga? Then Lemmings is going to be one of the formative experiences of the younger section of your existence.

It's not a case of rose-tinted spectacles though - the original Lemmings games were really, really good. But the franchise has yet to find a foothold in the modern gaming world, which is why we're reasonably excited that there's now a mobile adaptation.

Of course, that excitement is rightly tempered with a bit of reticence - it's been a while since there's been a Lemmings game worth remarking on - and with the game being to free to play, there's trepidation about how the game will make the shift. Well, that's what this review is for, so read on to find out whether Lemmings is set to get stuck in the brains of a new generation of gamers.

The first thing you're going to notice about the game is that it has a much narrower scope than the original Lemmings. Levels take place on a single screen, and you've got a lot fewer moves that you can get the little critters to perform in order to get them to the exit safely.

If you've not played a Lemmings game, the aim is to get a stream of the wee creatures from A to B without killing them all. Here that involves building staircases, digging holes, and giving out umbrellas when a fall is going to kill all of your lemmings before they make it out.

Tapping on a square or a block shows you the moves you can use on it. Tap on a block and you'll get a spade that lets you dig down or across to get through, but only if it's a block that you actually can dig through. 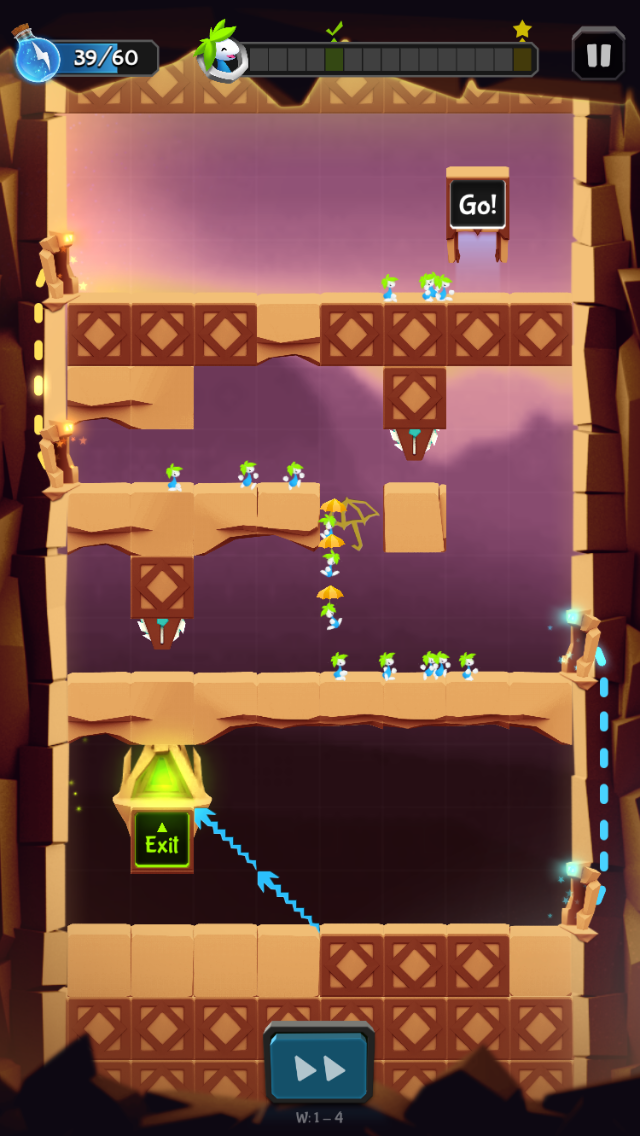 It's not the control scheme that older players are going to be familiar with, but since there's no mouse to click around with, it's probably the best we could hope for. Sure there are less options, but it also means the experience is an awful lot less fiddly than it could have been.

The free to play elements are another matter. It costs energy to give your lemmings jobs, and once you've run out you can't do anything. While it didn't happen in the first few hours of play, there's a very real chance that your energy could run out in the middle of a level, leaving you with nothing to do but abandon it and come back when you've got some more or paid some cash.

It's going to put a lot of people off, right or wrong, before they even play the game. And that's a shame, because there's fun to be had here. It isn't classic Lemmings by any means, but it squishes enough of the experience into your pocket that it'll scratch those small gaming itches that creep up from time to time.

Lemmings is a strange one - it's actually going to appeal more to people who haven't played the original than it us to those of us with a longing for a simpler time of gaming. Without the franchise attached it'd be an interesting but flawed game, but with it there it becomes something else entirely.

Lemmings isn't a bad game, it isn't a broken game - but there are problems here that are likely to put off a good deal of people. I'd suggest digging out the Amiga and giving the original a play if that's what you're after. But if you don't think Lemmings changing is a knife in the heart of your childhood, you'll probably find something to enjoy here.

There are going to be a lot of people upset about Lemmings, but if you don't have a connection to the series you might find something to like
Next Up :
Alien: Isolation review - "Chestbursting fun in the palm of your hand"