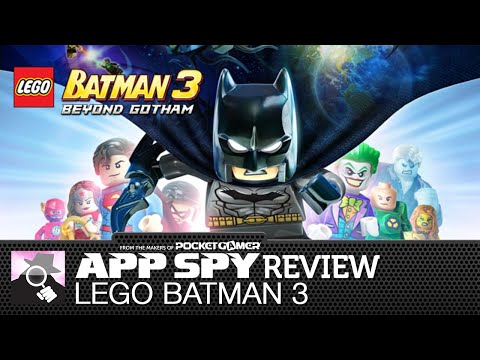 It's strange to think that the Lego games have become a little formulaic. They're still bouncy, cheeky slices of digital entertainment, but they haven't really changed since their inception.

Lego Batman: Beyond Gotham is no exception. It might expand the scope of the setting to universal proportions, but in the end you're still smashing, building, and fighting your way through the different levels.

There's fun to be had here, and it's an impressive and extremely playable mobile port, but if you've already grown a little weary of the Lego games, there's nothing here that's going to shake you out of that malaise.

As the title suggests, the game takes in a lot more than Batman's home town this time round.

You're fighting in the Justice League watchtower, swooping through space in a Bat Rocket, punching foes in the fortress of solitude, and hopping through other iconic settings in the DC Universe.

The plot deals with a plan by Brainiac to shrink the earth. You play as various members of the Justice League, swapping suits to give yourself new powers and skills.

The game keeps you on your toes, always making sure you're switching between the two characters you're playing as. But in the end, they all play in remarkably similar ways.

Combat involves mashing buttons, and while there's an Arkham Asylum-style counter system, it's rare you'll actually get to use it.

Puzzles are all pretty well telegraphed, and there's a hint system that makes sure you're never too confused about what to do next.

Fans of the DC universe are going to lap up the humour here, and the overall product is reasonably well polished. There's a bit of chug here and there, but nothing that spoils the experience too much.

But that experience is one you've had numerous times before. And while the ground it's crunching over is entertaining, you can't help but think that the franchise is going to need a kick in a new direction sometime soon.

Lego Batman: Beyond Gotham is another solid Batman game, but it's not much more than that
Next Up :
Evony: The King's Return review