Layers of Fear: Legacy Switch review - A horror game to play with the lights down low

In order for me to truly experience the most that Layers of Fear had to offer me, I decided to play it in the dark with my headphones on. The latter is recommended by the developers anyway, and it really does impact the title in a big way.

I tried to play it out and about, but the reflection of my face and my surroundings on the screen stole away any sense of atmosphere. Resorting to turning up the brightness just washed out the colours and robbed the game of any style.

When played in the right conditions, though, Layers of Fear isn't just tense and suspenseful, it's genuinely lovely to look at too. The shadows and shafts of light offer a great sense of escape.

Not that it's much of a pleasurable escape. It's dark and bleak and there are horror tropes aplenty as you wander through the mansion where the game is set.

You're who is exploring your own house, seemingly in the wake of a tragedy or upset. And the building itself, warps and changes as you explore deeper. 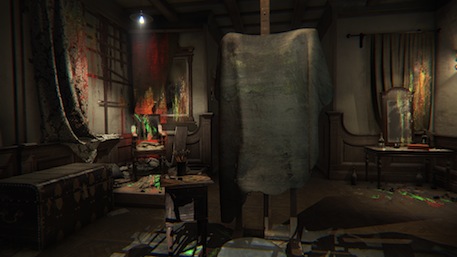 Out of the two control schemes - traditional and motion control - I preferred the traditional controls, but the motion option is both interesting and far from tacked on. Opening doors, drawers, and cupboards to find what dread waits inside is done one of two ways

You can hold the right trigger and move the stick to pull at the door, or you can hold the Joy-Cons and use movement. Either way, the act of physically interacting isn't lost, and serves to make the game more tactile.

Walking the corridors and seeking out secrets in the desolate rooms is all part of the overarching mystery. The story that's central to the experience is drip fed in voice-overs, hand scrawled notes, and bleak imagery. 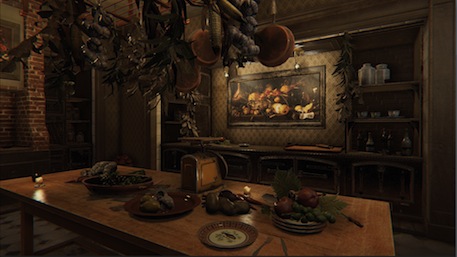 The plot is incredibly subtle, which speaks to the replayability of the title. This is a game you won't just finish once, but you'll come back to several times - there are three endings - to flesh out the story and drink in the environment.

Walking through doors, into rooms adorned with paintings and personal touches is wonderful, despite some often repeated textures and scenery models. Much of the game twists itself into a nightmare world, and here that repetition becomes less of an issue.

Entering a kitchen and looking at a painting above the stove can cause the screen to bleed colours as the walls are etched with black vein work and small details are brought into focus. 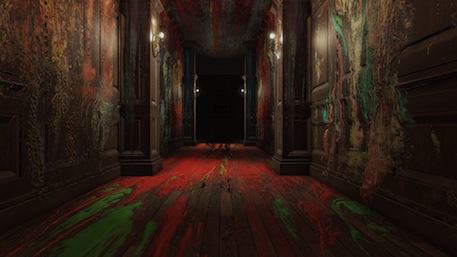 These almost hallucinatory situations build the tension remarkably well for a game that can be played as a handheld experience. Paintings fly off of walls, knives embed themselves into door frames, ghostly visages stalk and roam the echoing halls.

The creepy dolls, the children's laughter, and eerie telephone conversations are genuinely unsettling here. Especially when you're being driven from room to room, dizzied by the way the world around you seems so changeable.

A door that once held a child's nursery, might now hold a study. And when you leave through the only door into the room, you'll often find yourself back in the same study. This time though a child has scribbled everywhere - demonic images of death and pain.

It's a clever technique that not only keeps you guessing, but also makes you feel as if you are truly exploring a macabre and unknown world.

The horror, the horror

When journeying, you'll eventually return back to a studio room, with an easel. The pieces of story that you pick up on your travels get stored in the cabinets within the walls. It becomes a hub, although not one you can return to at will.

That room is almost a bookmark, something that gives you a moment to take a breath between the almost chapter-like structure of the game.

This is psychological horror at its finest. Some times it's unnervingly subtle, other times it'll bash you over the head with gruesome imagery. Layers of Fear is definitely a game to play if you're a fan of the genre, or indeed, just good, often terrifying, world building.

Layers of Fear: Legacy Switch review - A horror game to play with the lights down low

A brilliant horror experience that ticks all the right boxes. Just make sure you play in a dark room with headphones on
Next Up :
Hindsight review - "Deeply emotional but a tad repetitive"

Take your crumbling madness on the go as the Switch-exclusive horror Layers of Fear: Legacy gets a release date