La-Mulana is a classic retro Japanese platformer that first hit the PC in 2004. And now it's set to land on PS Vita in December this year. Just in time for the archaeological Christmas rush.

The game is a Metroidvania-style platformer that sees you delving deep into the bowels of the earth to try and discover a treasure that holds the key to immortality.

It's presented in gorgeous pixel art that harks back to the glory days of the 16-bit leaper. All nostalgic brown platforms and giant bosses that make you quake in your explore-y boots.

According to the post over on the PlayStation Blog that announced the game, there are going to be some new features in this Vita version. Although quite what they are remains to be seen.

The only new feature mentioned is a bestiary. And that's only a planned addition. 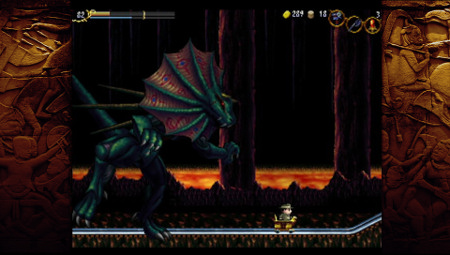 La-Mulana Portable, as the game might end up being called, looks like it'll be a decent fit for Sony’s handheld.

And hopefully some of those new features will make use of everything the neat little pocket console has to offer.

We will, of course, keep you updated as and when we hear anything else about the game. In the meantime there are a couple of screenshots in the gallery at the top of the page for you to check out.