How are you with first dates? If you groaned and retreated to the fetal position just then, consider playing Kitty Powers' Matchmaker.

It's a dating sim that has you working with drag queen Kitty Powers at her Matchmaking Agency. Powers is a pro when it comes to dating and, I dare say, some of her tips might rub off on you.

In the game, your role is set-up dates between the procedurally generated clients - they come in all shapes, styles, and sizzlin' formations.

"We really wanted to make a fun game that tackled a subject that was close to most people's hearts, namely relationships, and in a new and unique way," Richard Franke of developer Magic Notion told me.

"We wanted it be accessible to everyone but with the depth that a lot of mobile games lack.

"Also, we wanted to make an inclusive game that was about making people fall in love, not shoot each other in the face. Not that we don't like those, but we wanted to redress the balance a bit."

Your task, then, is to match your clients up with a date using Powers's black book. You then try to guide them through the awkward conversations that naturally emerge during a first date. 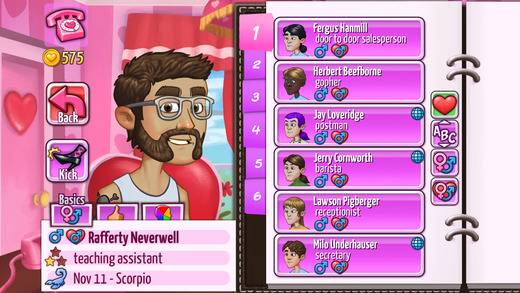 There are plenty of amusing events and features to dive into, including interrupting exes and pulling the "Love Handle".

With success, you'll unlock new dating venues, as well as locations such as the gift shop and the salon. A new hair cut never goes amiss for impressing a date, right?

It's also available for the Kindle Fire on the Amazon App Store [buy].