King of Fighters '98 is coming to iOS and Android, with Bluetooth controller support

And best of all, it will say sayonara to the iffy virtual buttons that bogged down its predecessor by supporting Bluetooth game controllers.

This fifth game in the series features a monster 38-fighter-strong roster, and stars most of the characters who appeared in previous instalments (including Iori, Lucky Glauber, and Saisyu Kusanagi). 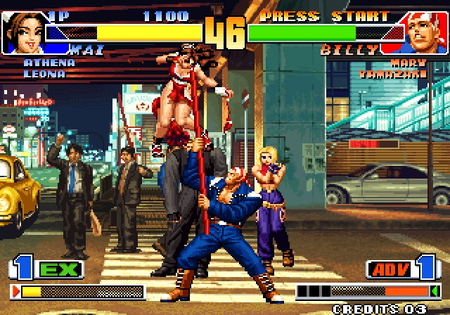 The upcoming mobile version has a four- and six-button control scheme, the option of using simplified special moves if you can't memorise all the buttons, a training mode, and Bluetooth multiplayer.

We'll let you know when the game lands on the App Store and Google Play. Until then, you better start learning your combos.

The King of Fighters '98

The King of Fighters '98 is SNK Playmore's mashing together of three years of brawlers, and it's out now on iOS and Android