KickBeat isn't the first game in which music is combined with fighting (PSP classic Paftapon springs to mind in this regard), but it is one of the most unique Vita games I've seen thus far.

A mixture of traditional rhythm-action and smooth, brutal fighting mechanics, KickBeat looks set to make quite the splash when it arrives in the autumn / fall.

On paper, the gameplay sounds reassuringly familiar, even if the story is a little surreal (and firmly tongue in cheek).

The world's music has been stolen and it's down to you to recover it. Unfortunately, it seems like every thug and his cousin are intent on preventing you from doing so.

Fighting back the brutes involves (initially) matching up your button presses to symbols shown on-screen as each baddie steps into a circular arena.

Your performance is graded on how close to the beat you manage to press these symbols, with every ten correct button presses adding to a multiplier that (hopefully) steadily builds as you beat the crap out of your enemies.

So far, so very rhythm-action. Things get slightly more complicated when differently coloured foes come into the picture, with blue and red enemies representing quaver beats and simultaneous attacks, respectively.

Additionally, there's a series of power-ups that hover above enemies' heads that require a quick double-tap to claim. Oh, and "chained" enemies that require you to press and hold. And then the game starts removing the symbols from the screen.

The result of all this: some incredibly intense gaming. So much so, in fact, that even in my semi-awake state in the early morning I was bobbing my head, completely absorbed by the game.

The quality of the soundtrack is one of the reasons you'll get totally immersed in the game, with each of the 18 songs deliberately picked to, as Zen Studios puts it, "make you want to punch things".

That is to say, you'll be breaking skulls and taking names to the likes of Papa Roach, Marilyn Manson, and some very funky Chinese rap rock. Rather than furiously skipping tracks from, say, Justin Bieber.

If that doesn't take your fancy, there's also the option of loading in your own songs and letting the game create levels from the resulting frequencies and rhythm.

The team told me that it initially designed the game with motion captured kung fu fighters in mind, but this proved too inaccurate for the beat-based gameplay.

Instead, your fighters have been animated by hand, and they move with superhuman speed and precision the millisecond you press a button.

It's incredibly satisfying to see your nippy little fella leap out and deliver a skull-crushing kick to the head - almost as satisfying as the slow motion "final moves" that kick in at the end of a section of the music.

KickBeat will be laying down the law on PS Vita this autumn / fall. While you're waiting, check out this brand-new trailer below. 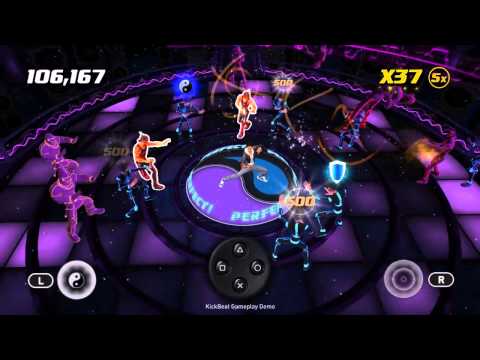 Subscribe to Pocket Gamer on
Next Up :
App Army Assemble: Dexter Stardust: Adventures in Outer Space - "Should you join this sci-fi journey?"

Zen Studios: KickBeat will go multiformat if successful on Vita