The park is open

Jurassic World is open for business. Or, at least, this free to play park builder is now available to download on the App Store for free.

The game is all about making money, levelling up dinosaurs, fighting simple RPG battles, and finishing missions for Chris Pratt and chums.

To get you started, we've put together some quick tips for new players. Leave your advice for players in the comments section below. 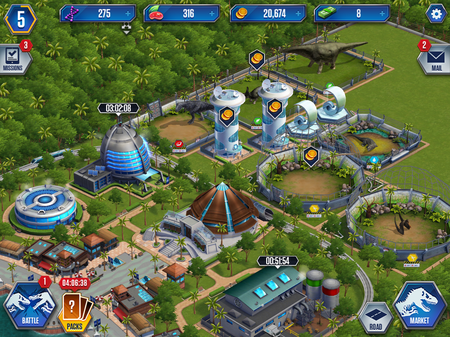 Feeding dinosaurs doesn't just make them stronger in battle, it also boosts the amount of money they'll generate per hour. Keep feeding your dinosaurs whenever you can afford it.

Don't worry about placement when you first start building. You'll have so little room until you can afford an expansion that you'll just want to fit everything in as tightly as possible. You can always move it later.

Make sure you evenly level up at least one carnivore, herbivore, pterosaur, and amphibian to be competitive in battle.

Food production is cheap, but you'll need to activate the food factory to actually get it churning out meat. You should do this as often as you can, and upgrade it whenever possible, or you'll be unable to level up dinos.

Don't forget structures! They're hidden behind the dinosaurs in your marketplace, and offer a cheap and easy way to boost your gold output. 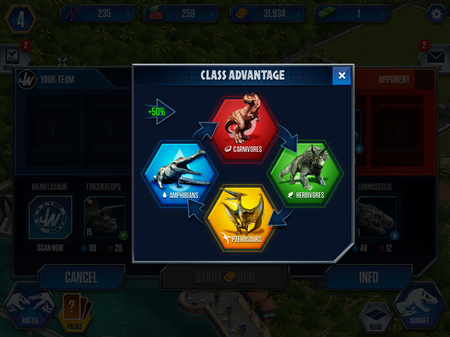 Remember that some dinosaurs are effective against others. Carnivores beat herbivores, which beat pterosaurs, which beat amphibians, which beat carnivores. A dinosaur in an advantagous class will do 50 percent extra damage.

With this in mind, carefully study the class of each dinosaur in your opponent's party, and pick critters that will have the upper hand.

You can change monster mid-battle by tapping on the dinosaur portraits. It will use up one action point, but gaining the class advantage makes it so worth it.

Next Up :
Hero Wars daily links for free rewards

Jurassic Park Builder gets a Jurassic World sequel on iOS