We ask the App Army?

Interloper is a beautiful-looking spaceflight combat sim that's been created by indie developer Matthew Purchase, also known as Anchorite. We recently gave some of our App Army community a chance to test their combat skills in outer space to see how they found it.

This was a colourful game but unfortunately, that was the most enthusiastic I could get. Despite the lengthy tutorial, I found the controls tricky to master and the constant spinning didn’t help. I really tried to persevere but it seemed that the harder I tried the more I spun out of control. Perhaps it’s because I don’t often play this genre of game, but I didn’t get far before I had to give up. That said, it was a colourful game, with lovely graphics and if the controls had been easier to handle I’m sure I would have been more appreciative of the gameplay.

Interloper is a really stylish and great looking space combat sim. The flight simulation, like world creation, is really simplified/optimized to feel almost arcade-like. There are roots here in Rogue Star’s cockpit view combat, and End of the Universe’s procedural generation. Completing a run gives you random weapons and components, dying on a run means you lose the equipped weapons and components. This element adds a real risk/reward dynamic. The problem that I’ve been having so far, is that there is either too much going on or too little.

Giant defenceless space stations sit there while I try to chip them down before crashing into them, ah wait, I’ll just park my ship to auto-fire and make some tea. Next run sees my drop out of hyper flight into a hornet’s nest, destroyed in eight seconds, I don’t think skill could have saved me. I’m sure there is a niche, some deeper elements, tactics and techniques for getting out of difficult situations, they just haven’t been presented in a clear way. I don’t mind grinding a bit to discover them, the developer is also actively supporting and balancing the game. If you are into space-combat sims, Roguelites, or wished there more to Morphite’s space flight aspects I can recommend Interloper.

I have very mixed feelings about this one. Visually it looks great. But I found that there is far too much going on. It was hard to track the action. Controls felt awkward and sometimes inconsistent. It did play a lot better with my 8bitgo controller. Also, I had a hard time getting it to run on my iPad Pro, though that maybe because I’m using the iOS 14 beta. This game has a lot of potential, and could get a lot better with updates (and practice on my part). Unfortunately, I’m just not feeling it yet.

Wow-what a ride! So happy I got the chance to review Interloper by Mathew Purchase. What really sets Interloper apart from other space sims is just the overall immersive-ness of the app itself. It takes what playing a game on a mobile device does well and uses its strengths to its advantages. The sound takes damage and explosions and adds depth to its special effects with subtle vibrations. The graphics pop with a strong retro vibe, and they make full use of your entire screen with a well thought out positioned control scheme.

The missions are fast but furious with lots of action between piloting and attacking the bad guys - perfect for mobile play. The game starts you off with a quick tutorial that really gets you ready for flight combat that I definitely recommend. What the game does above all else, is it just makes you feel like you really are a super cool space pilot on an action-packed interstellar adventure. That to me is the greatest compliment of them all.

There’s a lot to look at in this game... I mean you have a busy fast-moving screen filled with lots of terrain and debris and bogies and mission targets. And many of them are moving pretty fast. I like that you can customize your loadout to a degree, and some of those options can really make a difference. I’ve learned the value of running away when you think you’re going to get blown up. I like the fact that you can play either landscape or portrait, although I’ve stayed with landscape as it seems to spread the buttons out a bit.

The graphics are beautifully sharp and eye-catching. And I liked the occasional shadowy image of the pilot, generally between stages. Again, the screen is very busy, but that just adds to the experience. I expected to be overwhelmed by the sound, based on how frenetic the visuals were, but the sound came off as remarkably low-key to me. Controls are configurable to an extent (inverted Y axis, sensitivity, etc). Touch screen controls are adequate but the experience is vastly improved with a MiFi controller (I’m using Steel Series Nimbus). The story isn’t what grabbed me here, although there is one. I just loved the combat and the environment, and it’s something that makes me want to come back ‘for one more shot’ again and again. 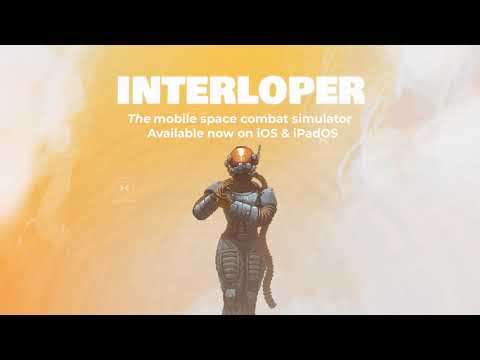 I tried playing it on an iPhone X and it looked great, but it kept getting very warm and I switched to the iPad, where it ran smoothly. I played Wing Commander back in the day, and the only thing that could be similar is the fighting, but Interloper is more Arcade like, very very fast, wave after wave, and perfect to play when we don’t have much time, as the fights and missions are short. Some missions have a lot of waves and are a lot more difficult and could take some time to finish. So there’s no campaign, just a lot of daily missions to go through, varying in difficulty and type of mission. Be prepared for a lot of dogfighting, attack big ships, protect some ships, and avoid powerful weapons from the capital ships that you have to destroy on some missions.

This is kind of a roguelike, you get weapons and power-ups from the missions that you can apply to your ship, and if you go on a mission and your ship is destroyed you will lose your payload. It’s a risky business. The bigger the risk, the better the reward. I didn’t try MFi controllers but the touch controls worked fine with a gentle learning curve. The radar is a bit confusing in the beginning but you get used to it. The fights are pretty fun, but that’s it, an arcade spaceship fighter sim for playing in short bursts, which could be perfect for mobile play anyway.

In Interloper you get to fly your spaceship from mission to mission, defeating enemies on the way and collecting loot at the end. You then use the loot to equip your ship and start over again. The game is clearly designed to be played in short sessions and the gameplay is really smooth. I also liked the quality low poly graphics. I believe it would benefit from a better (more detailed tutorial) and some sort of story - campaign. One other minor complaint is that I don’t actually get to see the enemy ships. They appear as red dots and are killed before they’re close enough to be seen. The good thing is that the developer is very active and constantly updating the game so it looks like it has the potential to become really good. (played on iPhone 7plus)

As an old X-Wing, Wing Commander and Elite-player I thought I was ready for Interloper. The pace is however much quicker, and more of a Tempest-kind of arcade-pace. Given that the controls(only using touch controls so far) are more in the old-school simulation-style I am getting my synapses(and shields, hull and life) fried. So far I am thinking that the game tries a bit too hard, and I would have loved to see the graphics engine combined with the controls in larger more deliberately paced space battles akin of Wing Commander.

I think there is a good foundation to build upon, but as a quickfire blasting wave after wave of incoming fighters there is a bit of a mismatch. Furthermore, I am really in need of a better radar, or tracking system to be effective in combat. X-Wing nailed it back in 1993.

Interloper gets first update of the year, introduces a new mission type and quality of life adjustments